'We Were Recruited In Mosques, Trained In Libya' - Terrorists Arrested In North Confesses (Photo)


Some terrorists arrested by the police have confessed how they were recruited into the group. 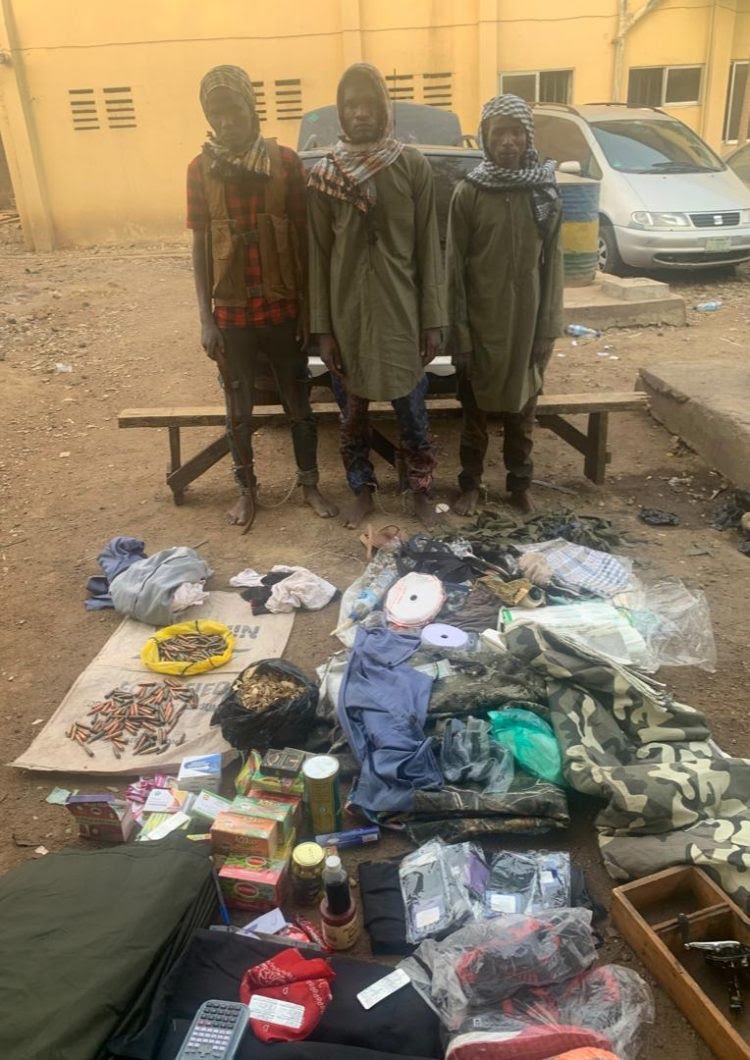 The terrorists after they were arrested
Nine members of the high profile terrorist group, Jama’atu Ansarul Muslimeena fii Bilaa dis Sudan, responsible for the kidnap of expatriates and influential personalities in northern Nigeria, have revealed how they were recruited from mosques and trained in Libya, Guardian Nigeria has revealed.
They were arrested by the Inspector–General of Police, Intellignece Response Team (IRT), led by DCP Abba Kyari at their hideouts in Kaduna, Kano and Katsina States.
A top source in IRT disclosed that the daredevil gunmen were hunted down in a decoy operation spearheaded by Kyari. According to the suspects, the terrorist group, whose membership spreads across the northern states and many African countries, presents itself as an Islamic group fighting a just cause, but after accepting membership, recruits are presented with the sad reality of being members of a criminal gang.
A top police source at Louis Edet House, who was part of the team that intercepted the suspects, said the gang’ operation base is at Birnin Gwari Bush.
The source revealed that the gang was responsible for the kidnap of two expatriates, Zaid Alas from Jordan and Isah Jabour a Syrian, both working with Traicta Ltd, Shiroro, Niger State, in December 2019, and only released their captive after collected N120m ransom.
The terrorist gang led Dogo Gide and Mahmud, both on the run, were also responsible for the kidnap for ransom of some employees of Mothercat Construction Company, as well as Magajin Garin Daura in Katsina State.
The arrested suspects were: Aminu Mustapha (alias China), 23; Aminu Saidu (alias Dawud), 26; Aminu Shuaibu (alias Abu Mus’an), 33; Ishak Khalid (alias Uztaz), 30; Yusuf Abubakar (alias AY), 24; Awal Umar Tela, 34; Abubakar Isah Muhammad (alias Khalifa Abu Aisara), 25; Shuaibu Ahmadu, 25 and Abubakar Mustafa (alias Osama), 32.
It was learnt the suspects were helping IRT operatives to track and arrest other gang members still at large, especially their leaders and armourer, one Aliyu Sokoto and Mus’ab, who sent threat email to Triacta Ltd, and negotiated with the company’s managing director, on how N50m will be paid to them yearly to stop kidnapping the company’s expatriates.
“A total of 204 rounds of AK47 Live ammunitions, military uniforms, operational vehicles including a Volkswagen Golf car, drugs and foodstuff meant to be conveyed to their gang members in the bush, and charms were recovered from the suspects. Investigation continues. Serious efforts are in progress to arrest the remaining members,” the source revealed
One of the suspects speaking on how he became a gang member, Shuaibu, from Kastina, said he was brainwashed into believing it was an Islamic group, with a good cause. Shuaibu, trained to treat sick and injured gang members, said he was promised financial benefit, which was what enticed him.
“Sometime in 2015 that I met one Mamoud in the mosque and after each prayer, we hang out to discuss about life. He told me about Ansarul and the financial gain in being a member, aside travelling to Libya.”
Shuaibu, who was sent to Libiya to assist members of the Ansarul group fighting against the then Libyan government, said he earned N50,000 every three months as wage for his contribution to the battle in Libya.
Top Stories