None Of Our Members Were Arrested With AK47 - IPOB


IPOB has denied reports that some of its members were arrested with AK-47 by the Nigerian police. 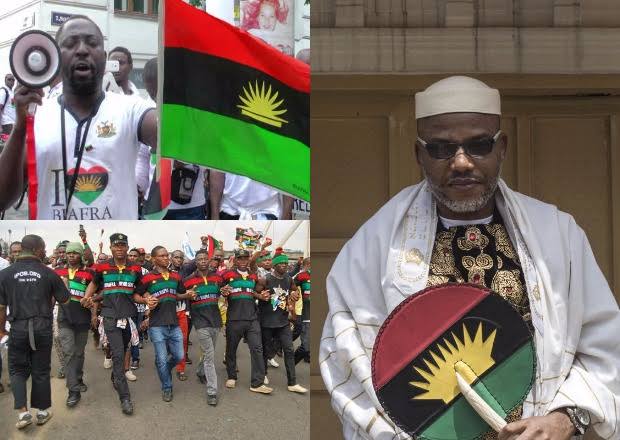 IPOB members
The Indigenous People of Biafra (IPOB) has discredited reports by the Nigeria police that some members of the group were in Delta State with AK-47 riffles found on them.
According to an official statement by the Publicity Secretary, Mr Emma Powerful, the suspects have no connection or affiliation with the organisation.
According to Vangiard, the statement read:
“It has come to the notice of the Indigenous Peoples of Biafra, IPOB, though not by surprise, claims by the Nigeria Police that some persons allegedly arrested with AK-47 riffles in Delta State are IPOB members.”
“We do not need to dissipate energy trying to prove our innocence because we already know the antecedents of the Nigeria Security agencies and their bitterness towards us, however, we wish to put the record straight for the sake of the gullible, and perhaps innocent Biafrans the security agents want to hang or waste unjustifiably by branding them IPOB members.
“The fact remains that our non-violent philosophy in our quest to restore Biafra Republic has not changed, and any time we feel like changing that position we shall make it open and also tell the world our next strategy. Our Leader, Nnamdi Kanu has continuously made it clear that Biafra will be actualised without firing a shot. And for now that position has not changed.
“IPOB remains a peaceful movement seeking to restore Biafra without violence. We are not into any arms struggle. If we were to pick up arms against the Nigeria government, thousands of our members killed in cold blood by Nigerian security agents would have defended themselves instead of dying like sacrificial lambs.
“If at all any person (s) were arrested with AK-47 in Delta State, those who arrested them should try to establish their true identity. No IPOB family member bears arms for any reason. We know of course that this will not be the first time the Nigerian security agencies will arrest people with or without gun, claim they had guns and try to link them with IPOB all in their desperation to disrepute an unarmed and a peaceful movement.
“Our global record speaks for us. IPOB has never been associated with violence or arms struggle anywhere in the world. The world is today listening to us because it is a proven and incontrovertible fact that we are not violent despite being wrongly tagged terrorist organisation by the Nigeria Government to stop us.
“We, therefore, want to advise Nigeria Security agencies to stop making jest of themselves by trying to associate IPOB with violence. They should try another tact because this one can never fly. Come to think of it, if IPOB were to be armed, what shall we be doing with 13 AK-47?
“If we need to fight with guns and bullets we know where to go for it and get the quantity we need. But we do not need arms and ammunition to achieve Biafra. Nigeria has already been dismantled through the consistent expositions of our great Leader. What remains is the burial of the expired British contraption which will soon take place at the end of the global coronavirus pandemic.?
“It’s very shameful that instead of fishing out the killer Fulani herdsmen slaughtering Biafrans in their homes and farms with AK47, the hypocritical Nigeria Security agencies are rather looking for ways to present the innocent people as killers. If the oppressed peoples who the Nigeria security agents have refused to protect against rampaging Fulani herdsmen decided to take their destinies in their hands by perhaps disarming their invaders, they should not link them with IPOB.
Top Stories