Ohanaeze Ndigbo, the popular apex Igbo socio-cultural group has been tackled by MASSOB over its stance for an Igbo presidency in 2023. 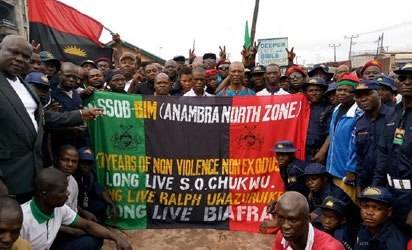 MASSOB
The Movement for the Actualisation of the Sovereign State of Biafra has slammed Ohanaeze Ndigbo for saying the group's mandate is to realise a Nigerian president of Igbo extraction and not an independent state of Biafra.
MASSOB, which reacted to a statement credited to the leader of the Igbo apex socio-cultural organisation in Anambra State, Chief Damian Okeke-Ogene, said MASSOB remained the voice of Ndigbo and not Ohanaeze.
Okeke-Ogene had on Tuesday Ohanaeze Ndigbo was pursuing Igbo presidency because the executive of Ohanaeze led by Chief Nnia Nwodo, had the mandate of Ndigbo to negotiate the Igbo position in Nigeria.
But the National Director of information for MASSOB, Mr Sunday Okereafor, stated on Wednesday that contrary to Okeke-Ogene’s position, the people of the South-East were no longer interested in having a president of Igbo extraction, ThePunch reports.
Okereafor said, “Ohanaeze has no agenda, but only pursuing their interest. They (Ohanaeze) are now shouting Igbo presidency. One of them is saying if they fail to get Igbo presidency in 2023, they will join Nnamdi Kanu to get Biafra.
“The fact is that when they get to that point, one Ibrahim will emerge, and Onu will be the Vice President.
“Ohanaeze is not the voice of the Igbo; MASSOB is the voice of the Igbo. The leaders of the Igbo are in MASSOB. If you present Igbo presidency and Biafra to the Igbo, you will see that the Igbo will pick Biafra and dump Igbo presidency,” Okereafor added.
Top Stories