Why I Became A Kidnapper - Pastor Confesses (Video)


A Nigerian pastor who is a professional kidnapper has confessed how he carries out his operation. 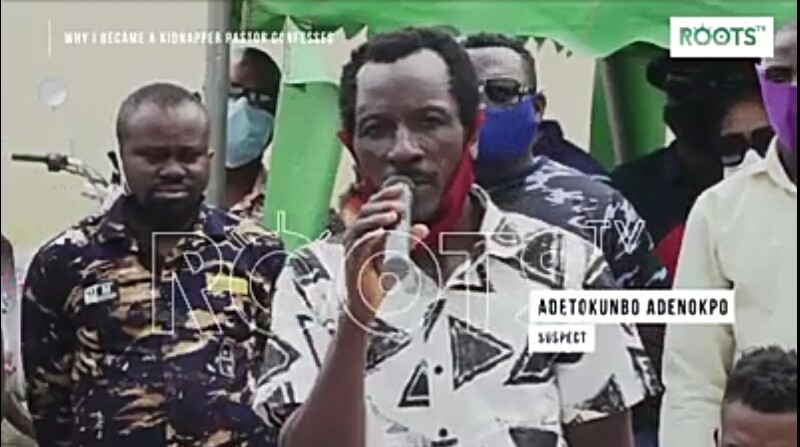 Pastor Adetokunbo Adenopo
A pastor, Adetokunbo Adenopo, 52 has confessed on camera why he decided to become a kidnapper.
While confessing on tape after being arrested by the police, Adenopo said he wanted money to expand his church. That was the reason behind him engaging in kidnapping.
He also added that he wanted to use money he got from kidnapping to do works of charity.
The pastor also shared details how he kidnapped a dispatch rider.
We had earlier reported that Police Operatives of the Nigeria Police Force (NPF) Intelligence Response Team (IRT) had arrested a 52-year-old pastor Adetokunbo Adenokpo for allegedly abducting a dispatch rider, Jonathan Ekpo, and detaining him in an underground facility in his church in Shagamu.
Force Public Relations Officer (FPRO), DCP Frank Mba, paraded Adenokpo, last month, alongside 34 other suspects for other crimes at the Special Anti-Robbery Squad (SARS) Headquarters.
He said the dispatch rider with Glory Master Logistics distributes Forever Living products and was abducted by Adenokpo, who is the General Overseer of New Life Church of God located at Lukosi, in Shagamu Area of Ogun state and his gang when he went to deliver some items at his church.
According to Mba, “Notable among the arrests is a criminally minded pastor Adetokumbo Adenopo, 52, Founder and General Overseer of New Life Ministry, Lukosi, in Shagamu Area of Ogun state and three other members of his criminal gang namely: Chigozie Williams, 22, a native of Umuahia North, Abia state; Ugoji Linus, 30, a native of Ezinifite in Imo state; and Emmanuel Chris Ani, 27, a native of Aniri in Enugu state; all responsible for the kidnap for ransom of one Jonathan Ekpo, 35, from Benue state.
“Curiously, the pastor told Police operatives that he embarked on the crime for the expansion of his church and charity works.
“The victim, an employee of a logistic company was kidnapped on July 17, 2020, while on official duty to deliver goods in Shagamu, Ogun state.
“The victim was kept in an underground cabin inside the Pastor’s church building in Ogijo Town, Ogun state, by his abductors who demanded the payment of twenty million naira ransom as condition for his release.”
The spokesperson said the victim was subsequently rescued, unhurt, nine days after and reunited with his family by the Police.
Fielding questions from journalists, the pastor claimed he was 22 years in the ministry having being ordained in Ibadan, stated: “In my church we do charity, where I share food and palliative to people and this became stronger during the COVID-19. I felt pity for people and I don’t have any money in my account and people still come to me for help.”
He said the underground facility where he detained Jonathan was built when he was attacked by some persons sometime ago and it was for him to escape into whenever the church was under attack.
“A few weeks ago we were short of funds. So I had the idea of doing something for Ileya (charity) so I can get some bags of rice and beans and palm oil and other things to share, and probably with a ram, which we can cut and give to poor people and we thought we should get money from the rich companies and then raise money and use it to take care of poor people.
“The three of us were involved in the kidnap of Jonathan with the hope of raising funds for the Ileya. I injected him because he was struggling I did not want him to be injured,” the pastor further stated.
Similarly, the Police also arrested one Udodiri Bright aka Ability, 30, a native of Osuachara Village, Isiala Mbano LGA of Imo state, and three others, Ekwuru Shadrack aka Escobar, 26, a native of Arondizuogu Village in Okigwe LGA of Imo state; Chimerie Igwe aka 4real, 30, a native of Umucheke Village in Orlu LGA of Imo state; and Chibuike Sunday, 28, old from Arondizuogu of Imo state.
The Spokesperson said they were arrested on July 5, 2020, for abducting and killing a Nigerian US Soldier, Chuks Okebata, who was in Nigeria on holidays in his home town, Okigwe, in 2017.
“The suspects, who are one of the foremost kidnapping groups terrorising the South eastern part of the country were arrested 31 months after, following intensive manhunt by the Police team,” Mba stated
He said, “The Police team also arrested a 9-man trans-boundary armed robbery and car snatching syndicate led by one Yakubu Hayatu, 30, from Borno state; alongside members of his gang: Adamu Awalu, 28, from Kano state; Abdulrahman Yakubu, 23, from Zaria; and Yususf Adamu, 22, from Zaria.
“Others are: Kamal Japhet, 22 from Katsina; Abubakar Samaila, 20, from Zaria; Muhammadu Abdulahi, 20, from Zaria; Yahaya Mohammed, 18, from Kaduna state; and Ibrahim Abubakar, 21, from Kwara.
“Investigations reveal that the syndicate has snatched over thirty exotic cars at gun point and killed two Policemen. They use anti-tracker devices to evade arrest and deliver the vehicles to one Alhaji Garba in Maradi, Niger Republic. Eighteen vehicles have so far been recovered by the Police team. The team is working with the INTERPOL to apprehend Alhaji Garba and to recover the remaining vehicles.”
He said exhibits recovered from the suspects include: four Ak47 rifles; one FMC rifle; one pump action gun; two double barrel guns; one beretta pistol; four AK47 magazine; six cartridges; 378 rounds of live ammunition; one Network Jammer (anti-tracker device), among others.
Watch video below:
Top Stories