A Little child has been spotted consuming a bottle of beer while adults watched. 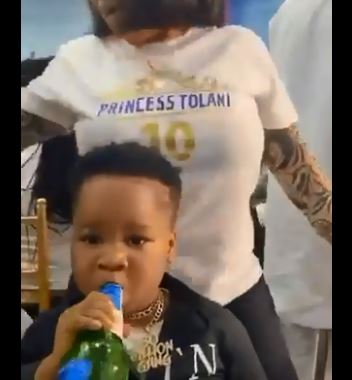 The little boy consuming a bottle of beer
A Nigerian little boy has left many people shocked after he was spotted in a viral video consuming a full bottle of beer in the presence of adults while at a party.
In the video, a yet to be identified little boy presumed by many to be 3-year-old could be seen drinking from a bottle of beer.
The setting is that of a party and adults could be visibly seen in the background dancing while music played in the background.
Rocking a “30 BG Gang” necklace and a fitting hairstyle, the little boy drank with reckless abandon while vibing to the sound of good music playing in the background.
Social media users have reacted to the video in condemnation, pegging it on “bad parenting”.
Watch video below;