Too Much Money! DJ Neptune Buys Himself A House As A Birthday Present (Photos/Videos)


The Ondo State Police command has revealed that the inferno which razed a section of of the INEC headquarters was caused by a power surge. 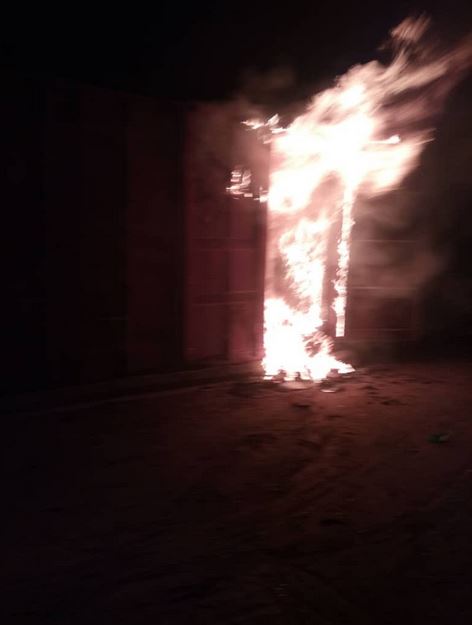 Ondo state police commissioner Bolaji Salami has said that the last week’s fire outbreak at the state office of the Independent National Electoral Commission INEC was caused by an electrical fault.

Over 5114 card readers meant for next month’s governorship election stored in two containers within the commission were burnt last week Thursday.

Salami who said this at a press briefing in Akure, the state capital dismissed speculation that it was sabotage.

The police Chief who ruled out an act of saboteur said the fire incident was caused “by faulty electrical connection to where smart card readers were stored.

He said that the police worked together with the Federal fire service to arrive at the conclusion.

According to Salami “the outcome of an investigation carried out by federal fire service showed that electrical surge from the air conditioners inside the containers housing the card readers caused the fire outbreak".

Opposition political parties have accused the ruling All Progressive Congress of conniving with the commission to rig the forthcoming election by setting the card readers on fire.

The police commissioner said that “Fire Service report on the incident has put to rest issues saboteurs setting containers ablaze".

He pointed out that any other findings would be made public.

“Investigation into the incident is out. The fire was caused by a faulty electrical connection and all the smart card readers were burnt The smart cards were kept in two containers on the premises of INEC and the air conditioners were kept on for 24 hours.

“This will put to rest speculations that the fire was caused by saboteurs. If there are other findings we will let you know. For now, the major cause is faulty electrical connections.

“This report is final from the fire service. They have the authority to investigate fire incidents in Akure".

Speaking on complaints of the destruction of campaign posters by political parties, Salami said his men were on the alert to arrest perpetrators.

“We are working hard to curtail political violence. We are meeting with political leaders to tell their followers to desist from attacking each other. We are investigating all aspects around the killing in Idanre.”

Salami appealed to political parties to play the game according to the rules and avoid violence, thuggery, and killings.