BBNaija: I Don't Have Beef With Tolanibaj, She Blocked Me On Instagram -Vee Reveals (Video)


The ladies had issues after Vee found out that Tolanibaj who was her friend, was allegedly after her man Neo. 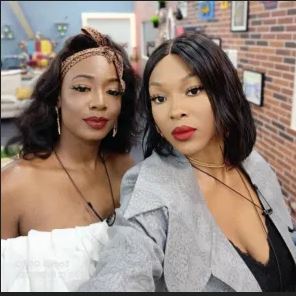 BBNaija Lockdown finalist, Vee has disclosed that her fellowhousemate Tolanibaj, blocked her on Instagram, following their fall out after the Show.

Apparently the ladies had issue after Vee found out that Tolanibaj who was her friend, was allegedly after her man Neo.

While Tolanibaj was still inside the Big Brother house, Tolanibaj told Erica she was attracted to Neo and wouldn’t mind snatching him from Vee.

After Vee came out of the house, she made it clear she can not be friends with Tolanibaj, who she thought was her friend before finding out she was after her man Neo.

In a recent interview with Olorisupergal, Vee when asked about her relationship with Tolanibaj said she doesn’t have “ beef” with her.

Vee said she’s ready to have a conversation with Tolanibaj concerning their issues, even tho Tolanibaj block her on IG, but that she really doesn’t know how to force things.