The protesters stormed the federal legislative complex in their numbers on Thursday. 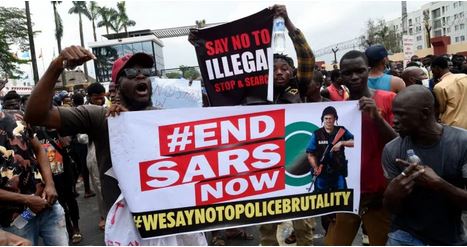 Nigerian youths who are staging the #EndSARS protests have taken over the National Assembly complex.

The Nigerians who are protesting against police extortion, brutality and extra-judicial killings, have taken their agitation to the National Assembly in Abuja.

The protesters stormed the federal legislative complex in their numbers on Thursday.

Bearing the Nigerian flag and other placards that mirror their demands, they marched to the National Assembly singing solidarity songs and chanting ‘EndSWAT!’ ‘EndSWAT!’

However, armed security personnel were observed barricading the entrance into the National Assembly beforehand.

The protesters said their goal of demonstrating before the lawmakers today was to lament the extra-judicial killings by security agents and to demand justice and compensation for victims of police brutality.

Penultimate week, thousands of protesters across the country started protests against the illegal activities perpetrated by operatives of the now defunct Special Anti-Robbery Squad (SARS) of the Nigeria Police Force.

And so, the police authorities in swift response to the public outcry disbanded the SARS unit.

In its stead, the Inspector General of Police, Mohammed Adamu, announced the setting up of the Special Weapons and Tactics (SWAT) unit as its replacement.

However, the protests and demonstrations have not abated but continue to evolve under dynamic social media hashtags such as: #EndSWAT, #EndSARS, #EndPoliceBrutality, #SARSMustEnd among others.