At least two persons have reportedly been shot dead by police officers in Lagos state. 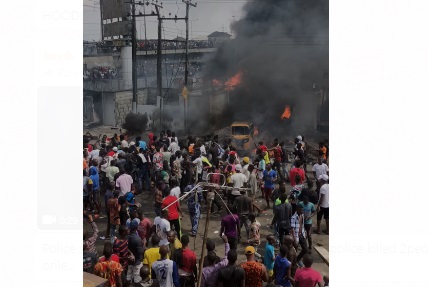 Protesters
Following the declaration of curfew in Lagos state, two persons have been reportedly killed by the police.
According to TheNation, the victims were allegedly shot dead in Mushin Local Government Area in Lagos in a clash between police operatives and suspected hoodlums.
Recall that the state governor Babajide Sanwo-Olu had earlier today declared 24-hour curfew.
One of the victims was seen on Agege Motor Road near Olosha drenched in blood.
Eyewitnesses said some people have sustained injuries and were being rushed to hospitals.
The Nation obtained a video clip where policemen were shooting to scare away the hoodlums.
As one of the officers ran out of bullets, the hoodlums made jest of him.
Details shortly…
Top Stories