TVC staff members have been evacuated by the police after a mob attacked the station on Wednesday. 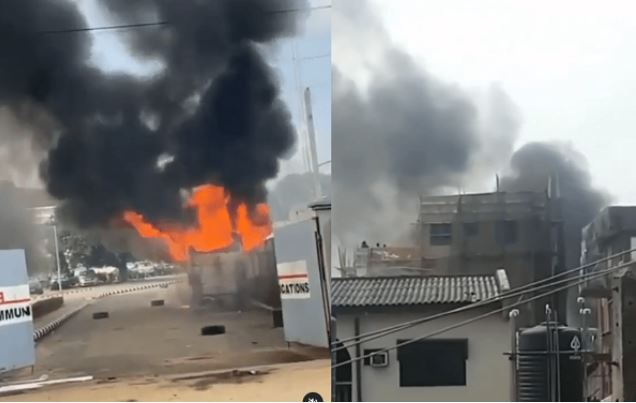 TVC on fire
Following attack on Television Continental (TVC), anti-riot police officer have rescued staff members of the station.
Recall that an angry mob set the headquarters of Television Continental (TVC) in Ikosi Lagos on fire on Wednesday.
Rampaging youths have taken to arson, vandalism of public and private properties across the state in reaction to the shooting of peaceful protesters at the Lekki Toll Plaza by security forces.
At the time of this report, more police stations across the state have been torched just as Bus Rapid Transport (BRT) terminals, Nigerian Ports Authority (NPA) head office in Marina, Igbosere Magistrates Court, Lekki Shopping Mall and many other important facilities have suffered attacks.
At the TVC, it was gathered the hoodlums who could not gain access into the building, set vehicles ablaze and were advancing in when policemen arrived the scene.
The policemen were said to have dispersed the mob, contained the inferno before evacuating occupants of the premises to safety.
It was also gathered hoodlums looted commercial banks in Lekki and carted away cash while cultists were alleged to have capitalised on the impasse to loot, kill people in Ikorodu.
Confirming the chaos, police spokesman, Olumuyiwa Adejobi said: “They are attacking and looting banks and people’s properties. Even taking away cars.
”They are hoodlums and they will be treated as such. Everybody is a target. Police stations and media houses not spared. Minimum force will be applied to curtail them.”
Top Stories