More details have emerged concerning a Nigerian man who killed his babymama during a fight in Bayelsa. 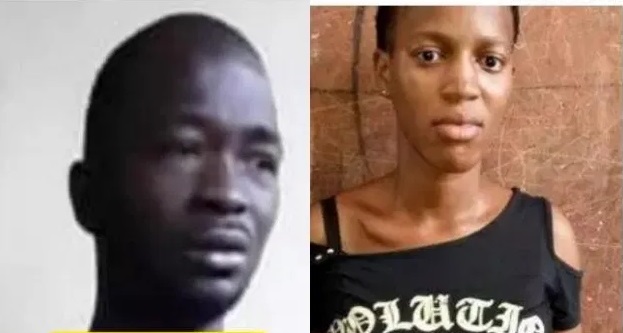 Promise David killed his babymama, Miss Esther Pascal during a fight
The photo of a 27-year-old man who killed his child's mother during a fight has been made public.
Promise David was said to have beaten his 18-year-old baby mama, Miss Esther Pascal, to death during a fight over food and welfare money for their baby.
The incident happened on Sunday night on Ebis Mechanic Road, Yenagoa, the Bayelsa State capital. The deceased had a two-year-old daughter for her lover who works for a popular car wash outlet in the Yenagoa metropolis.
Some residents of the neighborhood where Promise resides said that the quarrels between the lovers had been a recurring occurrence. One of the neighbors said they were woken up by the loud cry for help of the deceased.
“By the time few of us got to their door, it was locked from inside. But we forced it open and met the deceased on the floor. We quickly tried to revive her with water thinking she fainted but we discovered that she was dead. We immediately apprehended the man and alerted the police” a resident said.
While few residents claimed the man used a heavy object to hit the woman on the head, others claimed she was given a deadly punch on the head.
Confirming the incident, the spokesperson of the state police command, Asinim Butswat, said the suspect is currently in police custody and will be charged to court as soon as investigations into the matter are concluded.
Top Stories