According to reports, the baby was found in a sack on Wednesday at Igweogbuofia Street, Kpirikpiri in Abakaliki metropolis of the state. 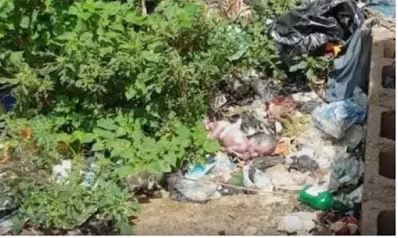 A newborn baby was abandoned by an unidentified mother at a refuse dump in Ebonyi State.

According to reports, the baby was said to be found in a sack on Wednesday at Igweogbuofia Street, Kpirikpiri in Abakaliki metropolis of the state.

Speaking to the News Agency of Nigeria (NAN) in Abakaliki, an eye witness, Mrs Chinwe Madu, claimed that the act was not committed in the area.

Mrs Chinwe insisted that the mother of the child must have committed the act somewhere and dumped the body in the street to avoid being identified.

“This evil was not committed in this area rather the perpetrator chose to dump the baby’s body here to cover up his or her act,” Madu said.

In reaction to the development, the Environmental Health Officer, State Ministry of Environment, Mr Sunday Nwonu, said that the ministry would collaborate with the Police Command to evacuate the body of the newborn.