Oh No!! Lady Dies After Different Hospitals In Lagos Allegedly Turned Her Back Due To Lack Of Bed Space


According to her, the lady lost her life after several hospitals turned her back for lack of bed space.

A Twitter user identified as Opeyemi Babalolatook to the platform to reveal how a Nigerian lady gave up in Lagos state last Wednesday, January 6 after she was allegedly turned back at different hospitals due to lack of bed spaces.

''Someone close to me died on Wednesday. She was taken to Gen Hospital Ifako but there was no bed space so she was taken to LASUTH, no bed space also & on their way to a private hospital at Ishaga, she gave up. Do you know how many Nigerians that have died this way & for how long?

Many families running away from the country can survive here but most are leaving because of the poor system in all sectors. Imagine no bed space in a general hospital & traffic on their way to a private hospital. So many untimely deaths because of poor infrastructures.

Once again, may Nigeria not befall you and yours.''

Other Nigerians also shared their sad experiences at some of the government-owned hospitals. 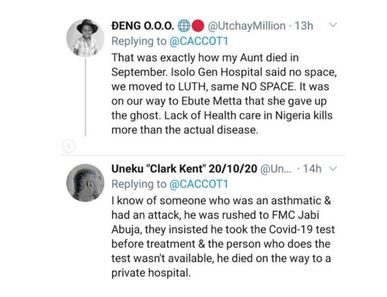