Security operatives have apprehended organisers of a strip party which was supposed to hold in Kwara state. 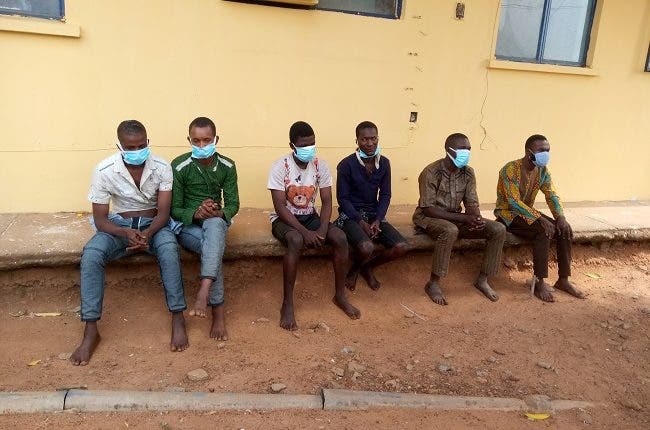 The suspects after they were arrested
Some organisers of a strip party and kidnappers in Kwara state have landed in serious trouble after getting arrested.
According to Kwara State police, a member of a notorious gang who planned to organise strip/naked party in selected places in the Ilorin metropolis was arrested on Wednesday.
He was identified as Akinsola Babatunde, aka Mr White and paraded alongside some kidnappers.
The state police commissioner, Mohammed Bagega, said that credible intelligence carried out on the criminal activities of the gang led to the arrest of the suspect at No.16, Achimugun street, Flower Garden, Ilorin.
The police boss, who said that the organizers of the strip party had advertised the show on social media for prospective subscribers at N20,000 per person, added that they planned to hold it in lounges, clubhouses, service apartments etc. in the metropolis and its environs.
Bagega said: “Immoral and illegal action of Mr White and his accomplices clearly contradicted the COVID-19 protocol, adding that it promoted crime and criminality.
“Operatives of the State Intelligence Bureau, attached to the command, carried out a string operation involving tactical undercover and manoeuvre. We actually played along with them by posing as one of the interested persons. We paid the advertised sum of money to a given bank account. With the cooperation of the other stakeholders, we nabbed the suspect while he went to cash the money in the bank.
“Effort is ongoing to arrest the fleeing members of the gang and they will be charged to court as soon as the investigation is completed.”
Also paraded were two of the suspected kidnappers of four Turkish nationals that were kidnapped and rescued in July 2019 at Gbugbu village in Edu local government area of the state by the police.
“In a concerted effort by the men of the command and members of the community, four of the six-armed gang were arrested with one AK47 rifle as at the time of the incident, the victims were rescued alive without payment of ransom.
“The arrested kidnappers mentioned the suspects being paraded today, who had escaped as being members of their syndicate. Ever since the command has been in the search for the two fleeing suspects. Actionable intelligence, however, indicated that the suspects were planning to carry out another operation and my operatives swoop on them and were arrested. During the investigation, the suspects confessed to be members of the kidnap syndicate that abducted the four Turkish citizens. They also confessed to have participated in several other kidnap incidents, especially along Enugu/Abakaliki axis of the South East of the country.”
Top Stories