The soldiers apprehended the suspects with arms and ammunition following a clash between two communities in the state. 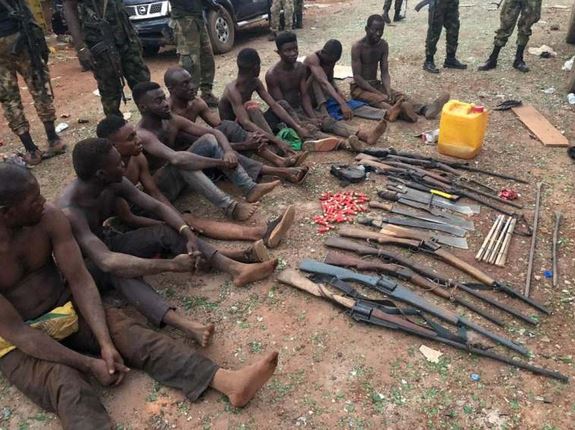 The two bordering communities took up arms against each other after disagreeing on the delineation exercises being embarked on by the National Population Commission, NPC, in the communities.

It was gathered that the irate youths in the sister communities had few days ago embarked on sporadic shooting and burning down of property in the communities when officials of NPC arrived the area to carry out the exercise.

According to a source in the area, “the ill-informed youths were of the belief that the exercise might not be done transparently. From what looked like a small quarrel, in no time sounds of gunshots rented the air from everywhere forcing the NPC officials to flee for their lives.

“The development snowballed into the burning of houses and property in the two communities prompting the intervention of the troops of OPWS and 72 Battalion who saved Oju LGA from witnessing a total destruction and major bloodbath.

“The troops carried out a two day condone and search operation in the communities and on the first day they arrested nine persons, recovered nine firearms, 59 ammunitions, eight cutlasses, two axes, nine handsets and one Volkswagen car.

“On Sunday night he troops raided the communities again during which they recovered seven more firearms and arrested one more suspect.

“The armed youths thought that the soldiers had left the troubled communities, they came out to continue with their arson when nine of them were round up and more arms recovered by the troops,” he said.

A security source told Vanguard that the arrested youths have been moved to Makurdi for further interrogation.