The suspects were hit with sticks and cudgels, stripped naked and burnt to death while the other was rescued by the police. 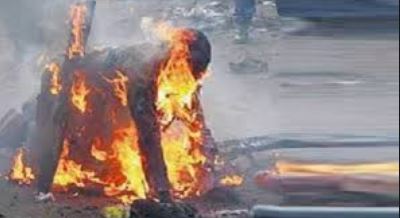 An irate mob set a man ablaze at about 11a.m. on Tuesday, Feb 16, injuring another one after they were accused of stealing bikes.

It took the intervention of policemen from Ashi and Bodija Divisions to put an end to the mob attack which occurred beside Methodist Grammar School, close to railway crossing at Bodija, Ibadan, Oyo State.

It was reported that the mob almost attacked the police officers for intervening.

The other man, who insisted he owns the motorcycle he was riding, was also rushed to a local government hospital after he was rescued by the law enforcement agents from Bodija Market Division.

The second man had been hit with sticks and cudgels, stripped naked and sprinkled with petrol to also set him on fire. But for the timely intervention of police, he would have faced the same fate as the first man.

The man, who gave his name as Akeem Muritala, explained that he is a bike rider.

He said he had just picked a passenger at Bodija Market entrance, on his way to Sango area, when he was challenged for riding an unregistered motorcycle and the assault began.

Muritala told the police that he has papers of the bike which he got on hire purchase. However, he said he had not registered the motorcycle because of cash constraints.

He added that his passenger was also attacked and he ran to save his life. He said he doesn't know what happened to the man.