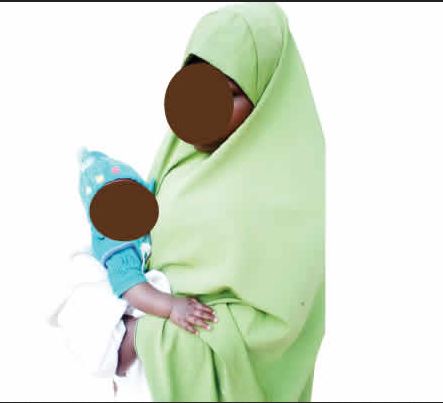 Aisha, a young Nigerian girl who is a JSS2 pupil in Dutse Safe community, Katsina State, has talked about how she was impregnated.

She tells OLAIDE OYELUDE (in Hausa language) how she became a mother at 15 after being impregnated by an officer of the Nigeria Customs Service who is allegedly evading responsibility.

Can you tell us your name, age and why you are presently staying with your grandmother in the village instead of being in school?

I am Aisha. I am 15 years old and a JSS 2 pupil at Dutse Safe, in Katsina. My parents live in Kano; I am their first child. I am currently staying with my grandmother in the village since I was impregnated and I eventually put to bed about four months ago.

The man’s name is Ibrahim. He is a (Nigeria) Customs (Service) officer in Katsina.

How did you know that he is a Customs officer?

He used to come to the village here in Customs uniform while he and his colleagues also visited in the Customs operational vehicle.

When and how did you meet Ibrahim?

One day, I was inside the room in the village when Ibrahim visited the village along with his colleagues. When leaving, he gave me N500 and dropped a phone number. He said I should use the money to help buy Fura (local wheat) for him. I bought the item as directed and later in the evening on that day, I called him that I had bought it – that was around 7pm after the evening prayers. He, however, told me that it was too late for him to come to pick it and that I should share it with my siblings.

Since that day, he kept on calling me. Then, one day, he came to our house in the village and said he was taking me somewhere in the Customs operational vehicle. He took me to an obscured corner and raped me.

Can you describe what the vehicle he came with looked like?

It was a Customs operational Hilux vehicle, painted in the Customs colour.

How did you know it was Customs vehicle?

Customs officials often come to our village in the vehicles painted in that colour while chasing smugglers.

How long had you known him before the day he allegedly took you away in Customs vehicle and sexually assaulted you?

What did he discuss with you whenever he came around or called you on phone?

What time of the day did he usually visit you?

He came anytime he liked. Sometimes, it was in the morning; at other times, he came in the afternoon and even at night and he would take me to a corner where, at times, we had intimate moments. Sometimes he would give me money; at other times he gave me gifts.

What do you mean by intimate moments; did he have sex with you?

Yes, we had sex three times in a week.

How did you know that you were pregnant?

My neighbours were the first to notice that I was pregnant and they told me. My family, including my grandma, then called and informed Ibrahim about it. Later, he called me and said I should meet him somewhere along the road to the village. I still have the phone number he gave me.

Initially, whenever I called the number, he would pick it but later he was not picking my calls again. So, when the pressure was too much for me in the village, I ran away to Katsina and I met his friend who used to come with him to the village. His name is Idris and he is also a Customs officer.

I left home because I was afraid that my uncles and aunties would beat me. I told  Idris that  Ibrahim was not answering my calls. He took me to his room in their quarters and promised to take care of me until his friend returned from Lagos. It was Idris who gave me transport fare to go to Kano to meet my parents. He told me to go and meet my parents because he was afraid that I might die due to my condition.

Was it because Ibrahim stopped picking your calls that you reported the case to an NGO, Queen Dijah Women and Children Awareness Initiative?

Auntie Khadijat (the coordinator of the NGO), had all along been supportive of me. When she learnt about my situation, she took me to the hospital for the necessary antenatal care and initiated steps to make the case public. She wrote petitions to various government organs, including the headquarters of the Nigeria Customs Service, the police and the Katsina State House of Assembly.

What exactly do you want?

Ibrahim, who impregnated me and made a mother, should marry me since nobody would want to marry me again. Secondly, he should come and claim the boy as the boy is his son. In fact, we named the boy, Hameed, after the Comptroller General of the Nigeria Customs Service.