Agu was reportedly on a charity mission to the less privileged when he was arrested by soldiers. 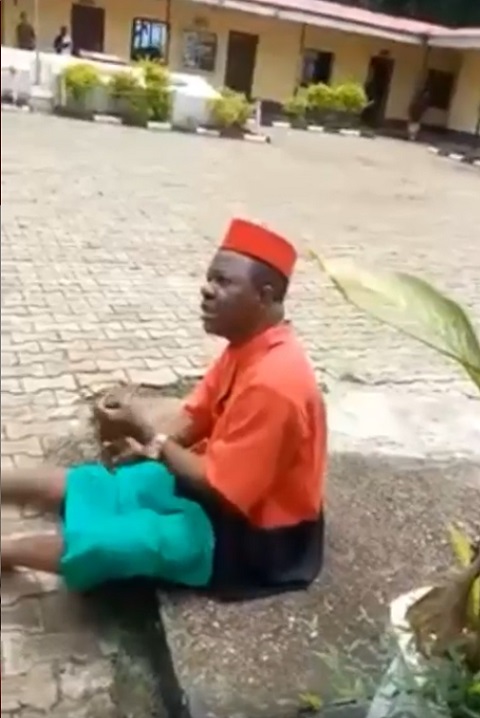 Chinwetalu Agu
Nigerians on social media have lambasted the Nigerian army for arresting Nollywood Actor, Chiwetalu Agu.
This comes after the actor spent his first night in the custody of the Nigerian army. He was arreste on Thursday.
We had earlier reported that soldiers arrested the actor around Upper Iweka Bridge in Onitsha for wearing an outfit with Biafra inscriptions.
Agu was reportedly on a charity mission to the less privileged when he was arrested by soldiers.
The Nigerian Army in a statement said that the actor was arrested “while inciting members of the public and soliciting for support for the proscribed Indigenous People of Biafra”.
In a telephone chat with The PUNCH on Friday, the Director Army Public Relations, Brigadier General, Onyema Nwachukwu, said the actor was yet to be released as he was still being questioned.
The military official, however, said he could not ascertain whether Agu has been granted access to his lawyers.
Some Nigerians who are gutted by the action of the military have described the actor’s arrest as illegal.
Human rights lawyer and activist, Inibehe Effiong, in a statement, said the arrest of the actor was “illegal, unconscionable and unwarranted. The actor has not committed any criminal offence known to law.”
Effiong said the military has no power in a constitutional democracy to arrest citizens except in very special and exceptional circumstances like during war, state of emergency, insurrection or riot.
“Supposing without conceding that the dressing of the legendary actor amounts to “incitement” as claimed by the Army, it is the Nigeria Police Force that should have responded. There is no evidence of incitement against him. Nothing was inscribed on the said cloth to incite the public,” he said, adding that the Army should apologise to the actor and pay him adequate compensation for “public humiliation”.
A Facebook user, Peter Udonsek, also described the arrest of Agu as “heartbreaking”. He lamented the “double standards” of the Army, saying the military has not deemed it fit to arrest controversial Islamic cleric, Ahmad Gumi, who has been seen hobnobbing freely with murderous bandits.
Similarly, Activist Deji Adeyanju flayed the Army over Agu’s arrest. “The same army that organise Repentance Red Carpet ceremony for Boko Haram terrorists,” he threw a mocking jab at the military.
Olayomi Koiki, Spokesman for embattled Yoruba Nation agitator, Sunday Igboho, also condemned the arrest of the actor in a Facebook post. “When is it a crime for someone to wear a cloth made with Biafran colours?” he queried.
Top Stories