Mayor Blessing in an Instagram post he shared, backed Tonto Dikeh's claim of Mena begging for her marriage to be saved.

The drama between Jane Mena is getting messier as a friend to Tonto Dikeh, Mayor Blessing and Jane Mena's brother, Anthony have reacted to the dancer's lawsuit against the actress over claims that Prince Kpokpogri has her (Mena) sex tape.

Mayor Blessing in an Instagram post he shared, backed Tonto Dikeh's claim of Mena begging for her marriage to be saved.

Blessing also claimed that the dancer and her brother Anthony approached him and begged him to talk to Tonto Dikeh so her marriage can be saved. He added that he is waiting for a petition against him, while also alleging that they've been trying to harm her.

''Tony you called me with your sister Janemena to pls talk to king Tonto to saved your sister marriage…maybe the next petition is against me. I’m waiting since you guys still trying to harm me receiving so many calls from different people, I stand with king Tonto court here we go. I’m Alive.'' 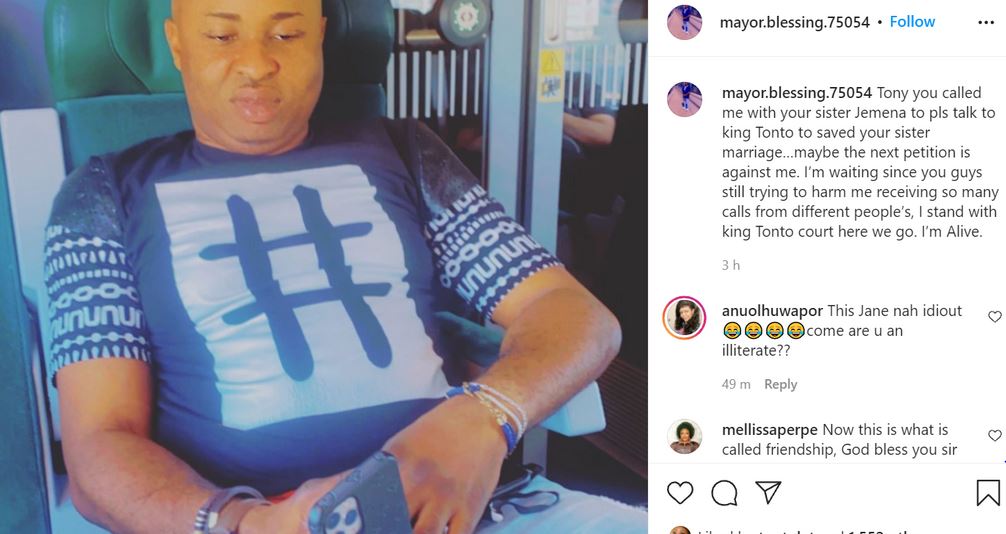 Anthony who also reacted to the development, backed his sister's claim of reaching out to Tonto Dikeh's friend, Doris, to "inquire about how she got wound of such false and misleading information".

He claimed that Tonto Dikeh twisted the call to suit her "self-created reality." Anthony also stated that his sister's marriage was never threatened or at the brink of collapse as claimed by the actress.

We never reached out to Tonto Dikeh to beg her as claimed as I was there with my sister, we only reached out to her as right thinking members of the society to inquire about how she got wound of such false and misleading information. .

Regrettably, Tonto Dikeh, as typical of her, twisted the call to suit her self-created reality.

Secondly, Janemena never spoke with Tonto, rather we spoke with one Mrs. Doris Oglala.

Lastly, Jane’s marriage was never threatened, much less at the brink of collapse as claimed by the self proclaimed King Tonto.

Tonto’s self created reality, will be her undoing. One devastating thing about self-created reality is that, you became impervious to realism.'' 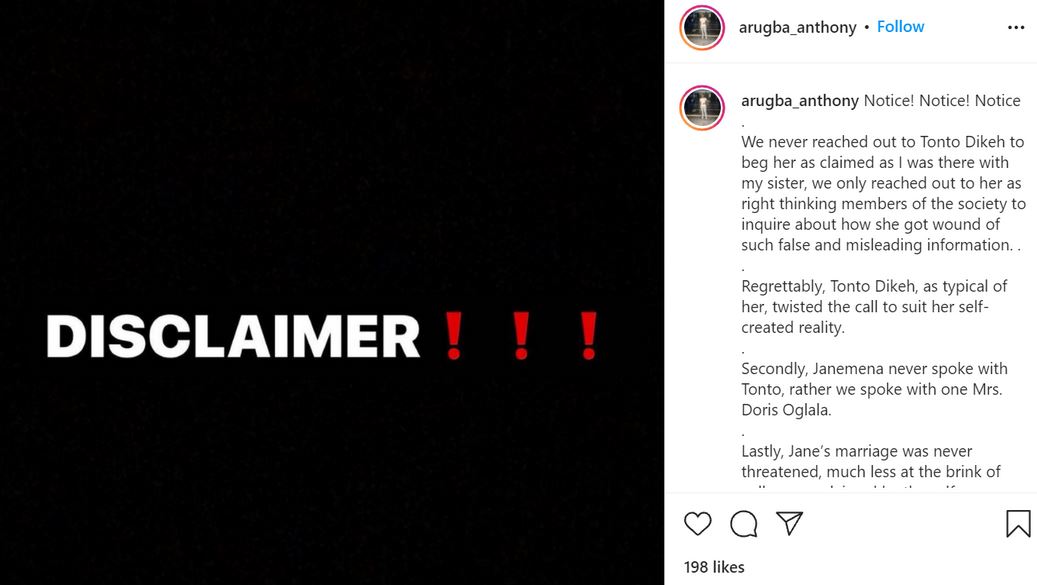 In a video posted on his page, he also stated that he asked Mayor to ask Tonto Dikeh to retract her statement and not to apologise to the actress.