No Blood Must Be Shed — #EndSARS Protesters Warn Police, Military As Nigerians Protest In Over 15 State Capitals


CORE made this known in a statement issued on Tuesday by the conveners of the group, Baba Aye and Gbenga Komolafe. 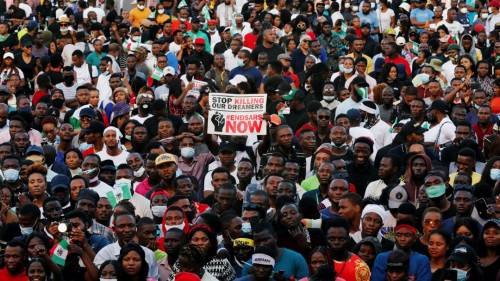 A civil society group, the Coalition for Revolution (CORE) says Nigerian youths cannot be stopped by threats from armed forces in commemorating the historic #EndSARS movement which was birthed a year ago.

CORE made this known in a statement issued on Tuesday by the conveners of the group, Baba Aye and Gbenga Komolafe.

They advised that the police and other security agents stay back and watch as the protests are carried out peacefully, stating that nothing will stop the youths from remembering those who lost their lives during the Lekki Tollgate massacre of October 20.

The statement reads, “Several organisations that played active roles in the #EndSARS protests last year have organised a series of activities over the last five days.

“This has been to honour those killed when the regime repressed the protests, and to demand the release of all those still languishing in jail over the protests as well as an end to continued police brutality.

“On 20/10/20, the world witnessed the #LekkiMassacre as the regime drowned the #EndSARS rebellion in blood. In memorial of this day, peaceful demonstrations will take place across Nigeria, on the platform of the #EndSARS United Memorial.

“The police and various states’ governments have threatened to stop these Nigerians. We will not be stopped. We will exercise our fundamental right protest and freedom of assembly tomorrow 20 October 2021.

“We want to make it unambiguously clear that we WILL GATHER to remember our dead and to remember our struggle, a genuine youth and mass movement which moved the soul of every Nigerian at home and abroad and which was punctuated by a ruthless government determined to maintain their positions of power at the cost of lives of innocent Nigerians.

“We call on the Nigerian government, the Nigerian armed forces and the Nigerian police to cease and desist from threatening peaceful protests and memorials and from using scare tactics to dismantle a movement whose time has come. We demand that no drop of Nigerian blood be shed tomorrow. No arrests. No beatings. Just stand back and allow us to remember our fallen heroes.

“We are united, to #EndSARS, to remember our dead and to call for justice in our land. We will not be deterred and nothing can stop us.

“Tomorrow we will march and gather in: Lagos; Abuja; Toronto; Ibadan; Jos; Enugu; Katsina; London; Adamawa; Port Harcourt; Benin city; Ilorin; Osogbo; Yenagoa; Asaba and Kaduna. We continue to struggle, and united, of one voice, we will surely win.”