The mother was arrested on charge of concealment of pregnancy and also taken to hospital for medical attention. 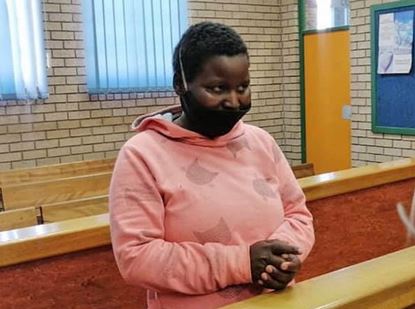 The mother in court on Monday, October 18

A woman has been arrested for allegedly putting her newborn in a suitcase and burying her in a shallow grave in a yard in Tsomo in the Eastern Cape, South Africa.

According to police spokesperson Colonel Priscilla Naidu, it is alleged that during the early hours of Monday morning, 11 October 2021, the woman from Xolobe Administrative area in Tsomo allegedly gave birth to a baby girl.

"The baby was allegedly put in a suitcase and buried in a shallow grave in the yard." Naidu state.

Naidu said police in Tsomo was alerted by the Chief of the area on Tuesday about his suspicion that the woman was pregnant and is no longer pregnant and that there is no child.

Police went out to Xolobe and found a grave in the yard. On digging it up, police discovered the child in blankets in the suitcase, still alive.”

She said the child was taken to the hospital. The mother was arrested on charge of concealment of pregnancy and also taken to hospital for medical attention.

Meanwhily, community leaders expressed their horror after learning that Ntalo had not been charged with attempted murder.

Amazizi traditional council head, Nkosi JongisizweNgcongolo, who reported the case on October 12, said: “This is shocking. This is the same woman who buried her baby alive for 24 hours and tried numerous times to perform an abortion,"

"She told the community and her relatives that she wanted to get rid of the pregnancy and the baby. Is this not making a mockery of justice? How can the police and NPA explain that? Why are they not charging her for attempted murder? We are disappointed. The baby could have died. It is a miracle that she was found alive." he added.

Though the incident caused a huge public outcry, no family members were present when the mother appeared at the Tsomo magistrate’s court on Monday.

The accused said she cared for eight children, from her 18year-old eldest daughter to an 18-month-old grandchild.

"I am also looking after my sisters’ children. I am the only person looking after all these children and the homestead. Both my parents have since died. My sisters work in Gauteng,'she said.

"I am unemployed and survive on child grants and money from my sisters. The father of the infant left the village and I don’t know where he is. He said he was from Lady Frere [Cacadu] but I don’t know his surname. I got pregnant after a one-night stand,' he said.

She will be represented by Legal Aid SA lawyers. The state did not oppose bail and the woman was released on warning.

Speaking to the Daily Dispatch, she said she was happy to be released on bail.

"It is not nice to be in jail. I miss my baby. When we were in hospital I had a special bond with her. All I want is to care for my little baby and the other children. I love my baby, she is so beautiful. I don’t know if my family or social workers will allow me to take care of her.  won’t harm her, I love her,” she told the Dispatch.