Farinloye added that nine people which included one female and eight males were rescued alive. 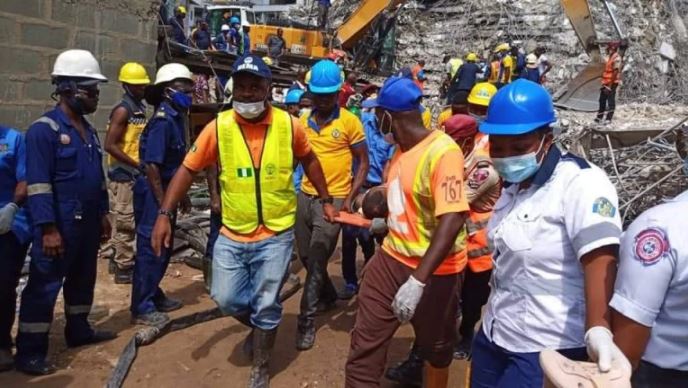 Scene of the tragedy

It has been revealed that the death toll in the 21-storey building that collapsed on Monday on Gerrard Road, in the Ikoyi area of Lagos State, has increased to 38, according to The PUNCH.

The building crumbled around 2pm when workers were on the site.

The PUNCH had reported that many people were trapped in the rubble, including the Managing Director, Fourscore Heights Limited, Mr Femi Osibona, who owned the building.

The South-West Coordinator of the National Emergency Management Agency, Ibrahim Farinloye, on Thursday confirmed that 33 males and three females have been brought out dead from the rubble.

Farinloye added that nine people which included one female and eight males were rescued alive.

The suspended General Manager of the Lagos State Building Control Agency, Gbolahan Oki, on Monday, stated that the collapsed structure was approved as a 15-storey building, and not 21.

But the Deputy Governor of Lagos State, Dr Obafemi Hamzat, while countering Oki’s claim, stated that 21 storeys were approved.

However, as the rescue operation entered day three, a new document emerged on Wednesday, showing that the Lagos State Government approved 15 storeys for the company.

PUNCH Metro noted that the document was issued by the Lagos State Physical Planning Permit Authority.

It indicated that a development permit of 15 floors and three blocks was granted to the Fourscore Height Limited on 44 B, C, D, Gerrard Road, Ikoyi (West), Lagos.

The permit was dated April 9, 2019 and signed by the agency’s general manager.

The Lagos State Commissioner for Information and Strategy, Gbenga Omotosho, said the panel set up by the government would look into the issue.

He said, “The governor has set up a panel of experts to look at what happened and that will be part of the things that the panel will try to determine. Tomorrow (Thursday), we are going to inaugurate the panel.”

Three days after the tragedy, nothing has been heard about the project owner, Osibona, who was said to be on the 18th floor of the building when it collapsed.

However, the spokesperson for the National Emergency Management Agency, Ibrahim Farinloye, on Tuesday, said the body of his personal assistant had been recovered.

The state Commissioner of Police, Hakeem Odumosu, said no one could tell Osibona’s whereabouts, adding that his body had also yet to be recovered.

The state governor, Sanwo-Olu, during his visit to the scene on Wednesday, said nine people were rescued alive, adding that three of them had been discharged.