The senator stated that Nigerian soccer lovers don’t need further dissatisfaction from Rohr, adding that he is not a good coach. 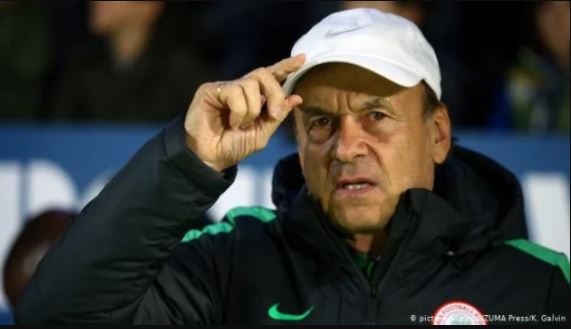 He stated that Nigerian soccer lovers don’t need further dissatisfaction from Rohr, adding that he is not a good coach.

Kalu said, “In the last five years, we have wasted our time in football. There is nothing new we are doing any longer. To see a country with many professional players home and abroad struggling to qualify for the Africa Cup of Nations and World Cup is heartbreaking. Gernot Rohr is not a good coach and I don’t understand why he is still managing Super Eagles.”

The Senator further revealed that Rohr had applied to become Enyimba’s coach when he was Governor but he denied him the opportunity.

”He was brought to Nigeria by Oscar Udoji but I refused to employ him.

“I am calling on the Chairman of NFF, Mr. Amaju Pinnick to wake up and to quickly find a replacement for Rohr. We, soccer lovers, don’t need further dissatisfaction in a game, we have the capacity to make ourselves proud.”

Kalu added that If Rohr has the same problem while coaching every year then he is not a leader.

”You are rather a problem on your own that must be solved,” he added.

This is coming less than two days after Nigeria played a 1-1 draw with Cape Verde in a World Cup qualifier in Lagos.