It was gathered that the man travelled from from Akure to Ode in Ondo state sitting on the roof of the car. 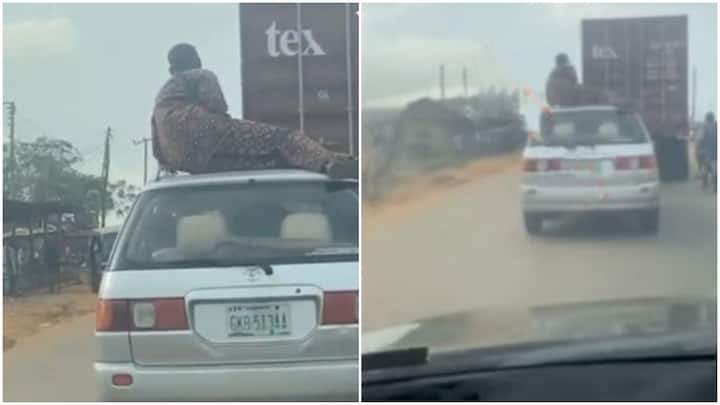 Man travels from Akure to Ondo on the roof of a car
A Nigerian man has caused a stir online after traveling from Akure to Ode in Ondo state sitting comfortably on the roof of a car.
He was captured on camera on the busy road by other passengers.
The video has since received reactions on social media.
See below:
_ifunanyachukwu said:
"Lol people are going through a lot..."
_orahh said:
"People would have thought he was scam if he comes up with the “I don’t have money on me and I’m traveling to akure” thing, hence this right here."
peacefulp105 said:
"People be risking their lives like they've nothing to loose."
_somebodys1stson said:
"I'm sure it's a tout from the car park who was feeling entitled to 200 naira from the car owner. Imagine going on a breezy unplanned road trip because of 200 naira that doesn't belong to you."
sweetsophieeee joked:
"Lagos people don Dey move to Akure."
Watch video below:
Top Stories