The young lady who took to social media to share the news says she has broken a tradition that has stood for 100 years in Urhobo land. 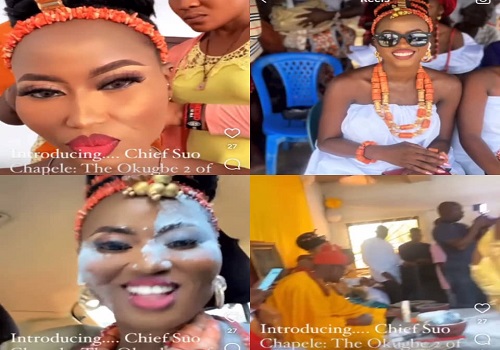 The lady shared photos on social media
A young Nigerian lady has made history in her community.
The woman identified as Tracy Chapele-Ugo recently got conferred with a traditional title in her hometown in Urhoboland.
The young lady who took to social media to share photos said she broke the tradition that has stood for 100 years in Urhobo land with her feat.
According to her, the title was previously conferred on her father and in over 100 years, the Kings in Urhobo land never gave the chieftaincy title of a deceased chief to any of his daughters, particularly if he had a son.
However, she was considered worthy and her father’s title transferred to her by her king in Udu kingdom in Delta state. 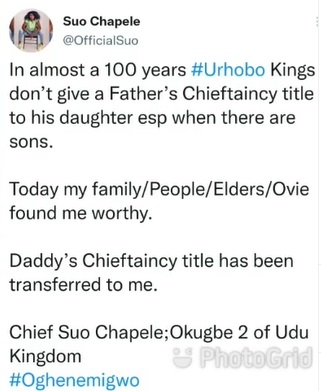 "In almost a 100 years #Urhobo Kings don’t give a Father’s Chieftaincy title to his daughter esp when there are sons. Today my family/People/Elders/Ovie found me worthy. Daddy’s Chieftaincy title has been transferred to me.
Chief Suo Chapele;Okugbe 2 of Udu Kingdom #Oghenemigwo”, she tweeted.
See her tweet below:
Top Stories