The royal sisters also said they were not “the cause of any or all forms of misunderstanding or ‘imaginary problems’ in the Palace.” 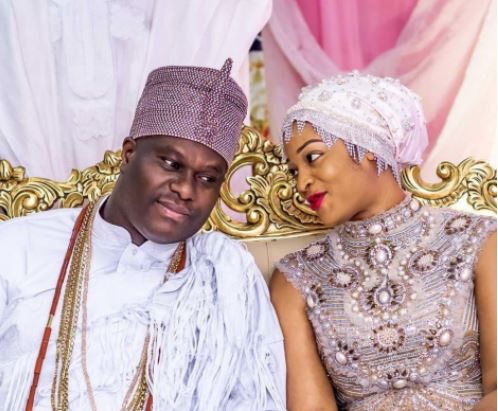 According to a report by The PUNCH, the Sisters of the Ooni of Ife, Oba Adeyeye Ogunwusi Ojaja II, on Tuesday, said they do not stay in the palace with the Osun-based monarch and do not interfere in the selection of his queens.

The royal sisters also said they were not “the cause of any or all forms of misunderstanding or ‘imaginary problems’ in the Palace.”

Their statement comes days after Evangelist Naomi Silekunola announced her separation from the monarch through an Instagram post on December 23, 2021.

The 28-year-old evangelist had also renounced the title of a ‘Queen’, saying she tried to make the three-year union work but the Ooni’s public identity is at variance with “his true self”.

Some online platforms (not The PUNCH) had subsequently accused the royal sisters of causing discord between the monarch and his estranged wife but the royal sisters, in a statement signed by Princess Folashade Ogunwusi-Fadairo, described the claim as false.

The statement was titled, ‘Campaign of calumny against the Ooni of Ile Ife, Ooni Adeyeye Enitan Ogunwusi Ojaja II & the royal sisters’.

It read in part, “We refer to the campaign of calumny presently ongoing in many media blogs, media houses, on the social media and by hatchet jobbers against our family targeting us, the sisters of the Ooni of Ife as being the cause of any or all forms of misunderstanding or ‘imaginary problems’ in the Palace. These despicable humans have been circulating the ‘fake’ news on various fake media outlets on matters none of them have an inkling of but will like to speak with unreserved authority.”

“In his immense wisdom, Kabiyesi from inception has separated the entire family from the activities of ruling our people forthrightly without any hindrances. His selection of who should be his Olori’s is also done without any form of hegemony or disturbance from any of us or the family. We support our Olori/s and have kept away from any of the matters concerning the private life of our revered King and father, Ooni Adeyeye Enitan Ogunwusi, Ojaja II.

“We have continually been inundated on many social media (fake & real) of our supposed intrusion into Kabiyesi’s private life. Some of the ‘fake’ information has continually claimed that we the Royal sisters (Yeye 1, Yeye 2, Yeye 3, Yeye 4) live in the palace and usurp all manners of communication, and/or information concerning the daily activities of the Palace. This is totally untrue, damning and slanderous.

“Since the Ooni of Ife ascended the throne of our forefathers, none of us (the sisters) has ever lived in the palace. None of us have ever been overtly or covertly been involved in any of the day-to-day activities of the palace. We do not make any decisions whatsoever and only visit the palace when there are special events that our family, the Giesi family are required to be involved according to tradition.

“We all live in Lagos in our different homes with our different families and are extremely busy with our businesses. We have never stopped praying for the success of our revered King, peace in Yoruba land and prosperity to all our people.”

The royal sisters further said legal actions would be taken against media outlets that publish unsavoury and unverified claims about them.

Since the split between 47-year-old Ooni and Evangelist Naomi, many Yoruba monarchs and elders including the Deji of Akure, Oba Aladetoyinbo Aladelusi, have tried to reconcile the two estranged couple but the peace talks have not yielded any results known to the public.

Before being coronated king, the Ooni was previously married to Adebukola Bombata in 2008 but the marriage failed. As a monarch, the Ooni married Edo-born Zaynab-Otiti Obanor in 2016 but the union lasted for 17 months before their separation.

He later married Silekunola in 2018 and the marriage produced a son before the divorce announcement on Thursday.

The monarch also had a daughter with Omolara Olatubosun as a teenager. Olatubosun gave birth to Princess Adeola Ogunwusi but recently, there have been counter-claims between the Ooni and Olatubosun over who was responsible for the upbringing of their daughter.

Aside from the Ooni, other traditional rulers who had experienced divorce known to the public include the Oluwo of Iwoland, Oba Abdulrosheed Akanbi, whose marriage to his Jamaican wife, Ms Chanel Chin, crashed in December 2019. Also, Anuoluwapo Adeyemi, one of the wives of the Alaafin of Oyo, Lamidi Adeyemi III, parted ways with him in November 2020.