Mother And Son Arrested For S3xual Exploitation Of Minor In Ekiti


The suspects allegedly abducted the 15-year-old victim, drugged her and sold her to men for money. 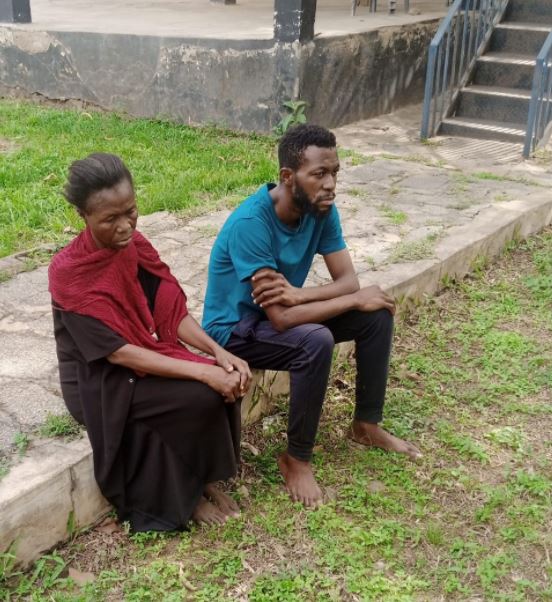 A woman identified as Mrs Ademiloye Felicia alongside her son, Adewumi, have been apprehended by the Ekiti State Police Command for abduction and s3xual exploitation of a minor.

Spokesperson of the command, ASP Abutu Sunday, who disclosed this in a statement on Monday March 21, said that sometime in March, 2019, the victim, a 15-year-old girl, left home for an extra moral lesson in preparation for her WAEC but did not return home, which was unusual of her.

The victim's parents subsequently reported a case of their missing daughter to the Police but all efforts made by the Police and her family members to know her whereabout proved abortive.

"However, on 15/3/2022, that is about three three(3) years later, the victim's mother received a credible information about her daughter's whereabout. She then alerted the Command's Juvenile Welfare Center (JWC) of the State CID who then swung into action and traced the missing girl to the house of one Mrs Ademiloye Felicia," the PPRO stated.

"The victim was immediately rescued while Mrs Ademiloye Felicia and her son, Adewumi Ademiloye were subsequently arrested for further investigation.

Investigation revealed that the victim was lured by Adewumi Ademiloye into his mother's house on that fateful day and drugged.

The victim revealed that after consuming the drugs given to her by Adewumi Ademiloye, she could not remember to go back home. She stated that she is now a drug addict due to the amount of drugs consumed within this period of three years.

Further investigation revealed that the victim is about 8months pregnant but has not been registered in any Heath Care Center or visited any hospital for Antenatal Care.

During interrogation, Adewumi Ademiloye confessed to the commission of the crime and will be charged to court alongside his mother for conspiracy, abduction, r*pe and child exploitation.