He said people close to him and knew his family was the next to ascend the throne began to call him and to ask him to consider taking up the throne. 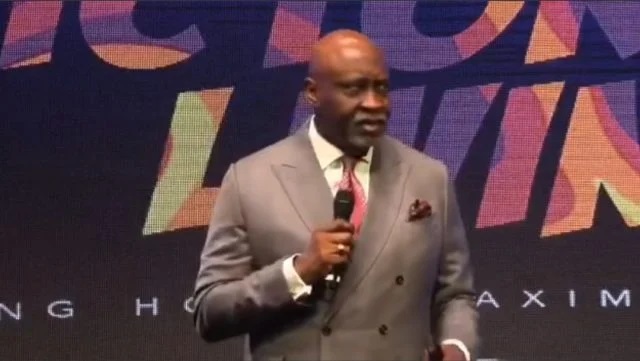 A former Redeemed Christian Church of God, Jesus House, Washington DC pastor, Afolabi Ghandi Olaoye has been crowned as the new Soun of Ogbomoso.
Now known as Oba Afolabi Ghandi Olaoye, the former pastor said God told him to become the traditional ruler.
Speaking to members of his Church in a video posted to the Facebook page of InsideOgbomoso, the Redeemed Christian Church of God, Jesus House, Washington DC pastor said he did not accept his new role because he had nothing else to do.
Hinting that he had planned to retire from the pastoral ministry after 30 years of service, Olaoye said his plan was to travel the world after his retirement.
He, however, said he was born into a royal family and entitled to the throne of Ogbomoso.
Olaoye, who apologised to his members for “any embarrassment” they might have “felt by what has gone on on the social media,”saying he was “genuinely sorry,” explained that he had served at Jesus House for 26 years and the Church had become his family.
Olaoye said, “While I was in Nigeria in December, the king of our town died. I’m really close to the family because, like I said, I’m from a royal family.
“After the Oyewumis, the Ajagungbades…my family is next. Everybody from Ogbomoso who is familiar with the tradition knows that. And I, of course, knew about that.
“But I was not interested in it at all, because I believed that I had gone on a completely different part.”
Olaoye said his father also never told him that he could become the Soun of Ogbomoso if he wanted to be, so he never had any intention of becoming the king of the ancient town.
He said people close to him and knew his family was the next to ascend the throne began to call him and to ask him to consider taking up the throne.
Olaoye said he called his spiritual father, the General Overseer of the Redeemed Christian Church of God, Pastor E.A. Adeboye, to intimate him of the situation. He said when he told Adeboye that he was not interested, the G.O. asked him not to say that but to fast and pray about it.
He said he did not take the advice seriously as he did not pray about it.
He, however, said that he heard God tell him on January 2, 2022, that becoming the Soun of Ogbomoso was his destiny.
“The next thing I heard, clearly, ‘You were born for this; this is the reason for your birth.’
“That’s what I heard. Of course, that’s not what I was expecting. But, let me tell you this, when I hear, I am 10/10” he said.
Top Stories