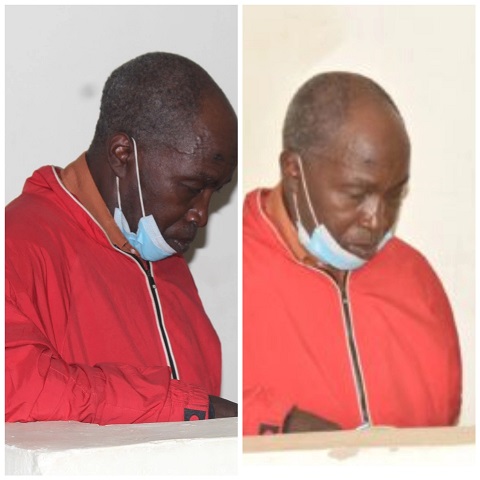 A 75-year-old man will spend the rest of his life in prison after he was found guilty of defiling his neighbour’s 6-year-old daughter.
The man identified as Wilson Motunde Enima, 75, was handed the penalty by senior principal magistrate Esther Bhoke at the Kibera law court in Nairobi, Kenya after he was convicted for the offence on Thursday, April 14.
Enima defiled the minor inside his house as her mother washed clothes outside on May 2017, in Lindi, Kibera.
The child had gone to play inside Enima’s house shortly after arriving home from school. She stayed at the house for about 30 minutes. Her mother got concerned and peeped into Enima’s house and where she saw him standing beside the child.
The girl then came out of the house. The minor at first denied anything had happened to her when her mother enquired about what she was doing with Enima in the house.
The victim’s mother went with her to her mother-in-law and reported what had happened and asked her to check whether the minor was okay.
The mother–in–law examined the child’s private parts and said nothing had happened to her.
But the child opened up a few days later when her mother discovered a foul smell from her private parts while washing her. She admitted that Enima had defiled her three times.
She was taken to a hospital where she was treated and discharged and the matter was reported to Kilimani police station. Enima was charged on May 30 of 2017 and found guilty after five years of trial.
While testifying in court the girl said the accused started touching her before defiling her.
"I went to his house and he gave me his phone so that I could play some games, he sat on the jerrycan and started touching my thigh,” she told the court. He then told me to remove my pant which I did but when I told him that my mother warned me against it, he proceeded and defiled me. It was very painful." she said.
In mitigation through a lawyer, Enima told Bhoke that he has a family fully dependent on him including a 23-years-old son who is ailing.
He said he is the sole breadwinner for the family of six as his wife has no job.
Bhoke, who described the offence as barbaric, said she considered the mitigation but also the provisions of the law.
"I therefore, convict him to life imprisonment, he has a right of appeal with 14 days," Boke said.
The Sexual Offences Act of 2006 provides a mandatory life imprisonment sentence for a convict found guilty of defiling a child below 12 years.
Top Stories