Joy told City Round that she was denied access to a piece of land her late husband, Arinze Okoye, bought in the Ikorodu area of Lagos before he died. 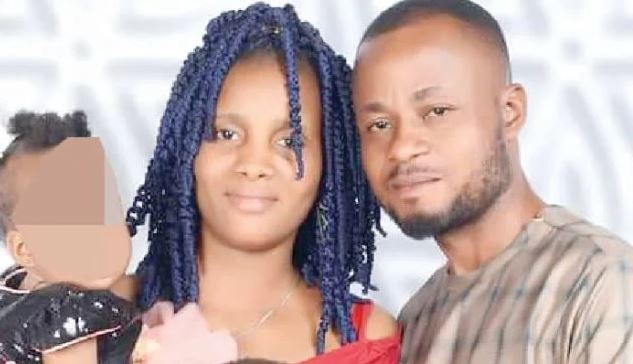 Joy Arinze, a twenty-four-year-old widow, has raised the alarm over the alleged hijack of her late husband’s property by his siblings, according to The PUNCH.

Joy told City Round that she was denied access to a piece of land her late husband, Arinze Okoye, bought in the Ikorodu area of Lagos before he died.

She also lamented that their action had affected her upkeep and that of her children, aged two and four.

The widow, who alleged that her in-laws accused her of killing her husbands, denied having a hand in his death.

She said Arinze, who hailed from Abam Azia in the Ihiala Local Government Area of Anambra State, was returning home from the Ketu area of Lagos where he ran a boutique in June 2021 when he was attacked and stabbed in the neck.

“My husband died in June last year. He was returning from Ketu where his shop was in the evening of that day. I called my brother-in-law, Kingsley Okoye, but he did not pick up. My elder sister later called to tell me that a man picked up my husband’s call and introduced himself as a divisional police officer and said my husband’s relatives should go to the nearest police station at Irawo.

“I was told my husband was stabbed in the neck. I did not follow him to the market on the day he was killed; I was at home. Some people who came to console me said they saw him bleeding and asking for help. The DPO told me that my husband died before the police got to the scene,” Joy told City Round.

Alleging that she was made to swear an oath to clear her name in the death of her husband, she told our correspondent that she reported the matter at the Ketu Police Station in the company with a non-governmental organisation, Esther Child Rights Foundation.

“I don’t know why my in-laws are against me. My husband had two shops where he sold men’s clothing; one of them was in Ketu Ikosi. Some thieves burgled one of his shops and stole his goods and that affected him financially. My husband had a piece of land in Ikorodu but they sold it.

“I had to swear. His sisters accused me of killing my husband. I want my husband’s elder brother to return the land, the shop, and the items in it to me. He also threatened to deal with me mercilessly. I am currently living with a friend and rely on the help I receive from people to feed. My children are with my mother in the village,” Joy said.

The founder of ECRF, Esther Ogwu, said the NGO was working to help the widow get justice.

“Her husband’s brother collected everything from her and she has two kids. I have reported the case at Ketu Police Station. We want the lady to get justice and everything that belongs to her husband,” Ogwu added.

But when our correspondent contacted Okoye on Friday, he denied the allegations.

He said while the issue was a family matter and had been resolved.

“I have never done anything like that (threatening her) and I don’t have a problem with her. I did not sell anything. This is a family issue. The matter is still with the police.

When City Round asked him whether Joy was made to swear an oath over her husband’s death, he said, “We don’t have anything like that. That is why I am saying that it involves her family and my family. The matter has been resolved. I can’t say everything on it. Just know that I don’t have any problem with her,” Okoye added.

However, the Police Public Relations Officer, Benjamin Hundeyin, said the case was under investigation.

“I can confirm it was reported. We are still investigating,” he said.