The Chelsea boss has agreed a deal with the Serie A champions and has made a request to the Blues to be let out of his contract. 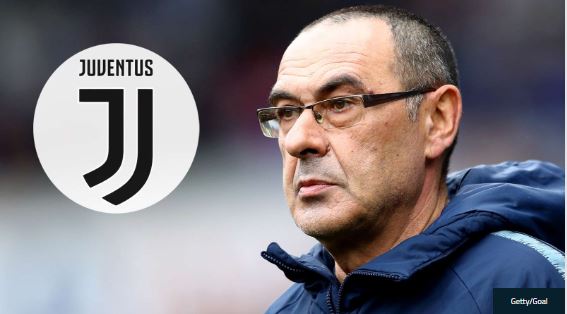 Maurizio Sarri
Maurizio Sarri has reached an agreement with Juventus to become the Serie A champions' next head coach and has requested Chelsea release him from his contract to join the Bianconeri, Goal understands.
Fali Ramadani, Sarri's agent, met with Chelsea management Friday to discuss his client's future with the club as a move to Turin draws closer and closer.
The 60-year-old Sarri intended to wait until the end of the season, and specifically the Europa League final, to consider the subject of what came next in his career.
But the Chelsea boss has received an offer from Juventus that would pay him €7 million (£6m/$8m) to succeed Massimiliano Allegri, who had coached the Bianconeri to five straight league titles, at the club.
Ramadani relayed news of that offer to Chelsea, as well as Sarri's request to be allowed to join Juventus, though the Blues will take a few days before providing the manager with an answer.
Chelsea do not want to be unprepared for Sarri's departure and are targeting a new manager before giving the green light for their current boss to leave.
Former Chelsea star and current Derby County manager Frank Lampard has been linked with the job in recent weeks, though the ex-Blues midfielder has downplayed those reports in the build up to his side's 2-1 defeat to Aston Villa in the Championship promotion play-off final.
Sarri appears to have beaten out a host of candidates for the position, though that list includes a trio of managers in Mauricio Pochettino, Pep Guardiola and Jurgen Klopp who were unlikely to depart for Turin due to their strong relationships with their current clubs.
Having been the subject to speculation about his job for much of the second half of the season, and enduring a difficult relationship with the Chelsea supporters, Sarri did not share the same connection to the club as his Premier League colleagues.
Should Sarri depart for Juventus, he will leave Chelsea having improved on the league position achieved by Antonio Conte in 2017-18, going from fifth to third, and returned the club to the Champions League for next term.
He also guided the Blues to a pair of finals, falling to Manchester City in the Carabao Cup decider on penalties while defeating London rivals Arsenal 4-1 in the Europa League final on May 29.
Sarri will be joining a former rival in the process, having guided Napoli from 2015-18, guiding them to a pair of second-place finishes behind Juventus.
Top Stories