A group of legends are returning to Stamford Bridge in a variety of roles as part of a root-and-branch shake-up in West London. 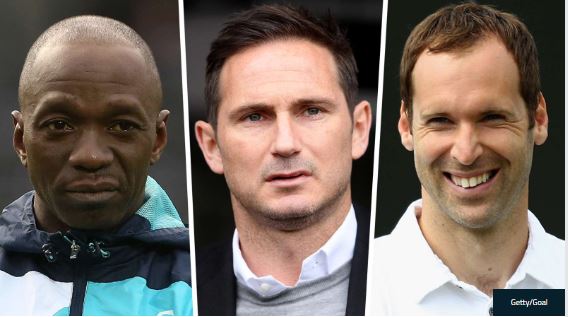 Claude Makelele, Frank Lampard and Peter Cech
Claude Makelele will be given a prominent coaching post with the loan group at Chelsea as part of Petr Cech's return to Stamford Bridge to take on a role similar to that of a technical director.
Several sources close to the west London club have been talking about the return of a host of club legends to Stamford Bridge, which is set to be kick-started by the announcement of Cech’s appointment in a leadership role across football operations.
Makelele has recently left his managerial job at KAS Eupen but he remains an ambassador at the Belgian Pro League club where he guided the minnows away from relegation in two successful seasons.
He will be the latest addition to a Chelsea overhaul that has long been planned by director Marina Granovskaia, who has been keen to refresh things at the club after manager Maurizio Sarri's exit to Juventus was announced on Sunday.
Sarri will be unveiled at Juventus on Thursday but it may take a few more days for progress to be made on appointing Chelsea's first-choice replacement in Derby boss Lampard as discussions are had about which backroom staff he will bring.
Lampard’s assistant manager Jody Morris is likely to be the first name on his list to join him back at the club where he became the all-time leading scorer with 211 goals.
Morris is the former Under-18s head coach at Chelsea and has worked with many of the loan and youth players that he and Lampard will be encouraged to use next season due to FIFA's imposed transfer ban.
Mason Mount has a Japanese visa set up so he can attend Chelsea's pre-season matches against Kawasaki Frontale and Barcelona in Asia, and is one of the most likely young stars to get his chance after a campaign on loan at Derby.
The likes of Tammy Abraham, Reece James and Fikayo Tomori are some of the other youngsters who could get their chance, while France internationals Kurt Zouma and Tiemoue Bakayoko are hopeful that the change in management will see them get another opportunity under the new regime.
For Bakayoko, the appointment of Makelele is a massive boost as he will find another ally at the club after being mentored by his compatriot at Monaco.
Former Chelsea coach Chris Jones could also be among the staff, while Lampard's head of performance Stephen Rands is expected to follow him to west London, just as he did from Manchester City to Derby last season.
Chelsea have not commented on appointing Sarri’s successor, and they have yet to accelerate talks over the new manager, but there are thought to be few barriers to naming Lampard as the Rams will ask for £4 million in compensation.
Top Stories