Life could have been very different for the Gabon international had he made the decision to give it all up in his teenage years. 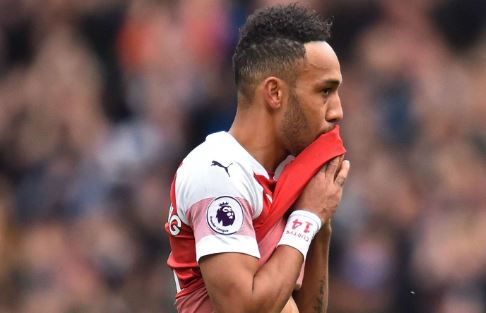 Pierre-Emerick Aubameyang
Arsenal striker Pierre-Emerick Aubameyang has revealed that he was close to quitting football when he was growing up.
Now earning his living as one of European football’s top strikers, his story could have been extremely different.
Speaking to the club's official website, the Gunners star admitted that he fell out of love with the game as a youngster but revealed that, with his father's support, he soon got back on track.
"Back then [when he was a child growing up], we were moving around quite a lot, and I played youth football for Nice, Laval, and Rouen. Sure, it was difficult to move around a lot, but now I can see that it’s been a massive benefit as it’s helped me settle into new environments very quickly," he said.
"I’d had some problems with my knees and I couldn’t run as fast as I had been able to, so I fell out of love with football for a bit. I didn’t have a club, I wasn’t at school, I was just at home trying to think positively.
"I don’t know why, but I thought that I had to train hard because you never know in life, something can happen.
"Then after six months of hard work, my father called me and said, ‘Are you ready to go training with a team?’ and I said, ‘Yes of course!’ because I had worked for six months for that opportunity. That was when I started to train with Bastia and from there, that was the start of my professional career."
Aubameyang then had several loan spells in Ligue 1, before eventually settling at Saint-Etienne. This was followed by a successful period with Borussia Dortmund, before the 30-year-old then made the switch to English football, explaining that it was an easy decision to join the Gunners.
"I’d always admired Arsenal because of the big history and players like Thierry Henry. He was always an example for strikers and because I am also fast and score goals, I always looked up to him," he added.
"It’s been very easy to settle here. The fans have been welcoming and of course the team have been really good to me."
Aubameyang scored 22 league goals last season, finishing as the joint top scorer with Liverpool duo Mohamed Salah and Sadio Mane, and he puts that success down to a positive relationship with Alexandre Lacazette both on and off the pitch.
He said: "We have the same vision about football when we talk in the dressing room, the same ideas and the same feelings. The fact that we understand each other is the thing that makes the difference in the games.
"Last season was the first full season that I’d played with another striker like him, and I’m really happy with how well we worked together."
Top Stories