A woman has been arrested after using a pillow to kill her son saying she was instructed by a demon. 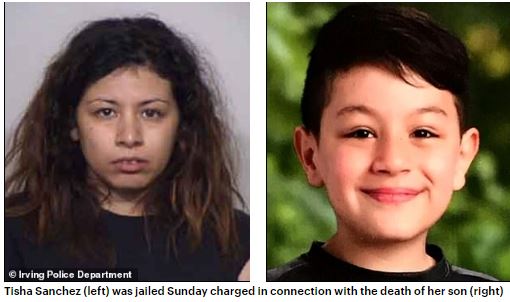 A Texas mom has been charged with capital murder after 'demons told her to sacrifice him.'
According to Dailymail, a relative told police that Joevani Antonio Delapene, 8, was killed, possibly by suffocation with a pillow, in an RV behind his home.
Tisha Sanchez, 30, was jailed Sunday after someone was reported as being unconscious at about 7:30 a.m. at her home in Irving, north west of Dallas, Texas.
Sanchez also called police and said she thought her son had died, according to the affidavit.
The Dallas County medical examiner said that Joevani had already died when they arrived at the home.
Sanchez - whose bail hasn't been set yet - was transferred from the Irving jail to the Dallas County jail on Monday.
As well as her capital murder charge the 30-year-old is also facing assault of a peace officer and resisting arrest.
'His caring nature touched countless lives and created many, many friendships,' the boy's aunt wrote about him on a fundraising site.
'He had a contagious smile with an even bigger heart.'
Top Stories