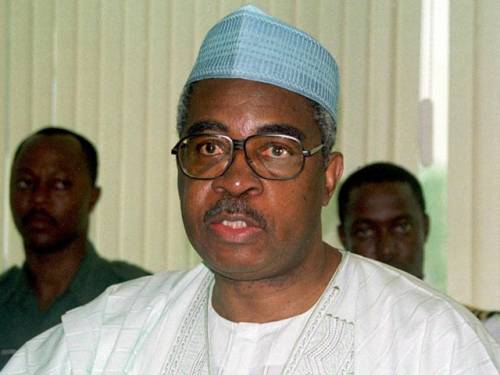 TY Danjuma
Lt-Gen Theophilus Danjuma (rtd) is currently worth $1.2 billion, according to the Bloomberg Billionaires Index. This amounts to over N400 billion based on the current exchange rate.
Danjuma retired from the Nigerian Army in 1979. He reportedly made his wealth from oil block awarded to him.
In a new report which details his staggering wealth, Bloomberg says the 80-year-old former military officer owns a 300-year-old inn in the city of London.
Popularly known as “The Kings Arms Hotel”, the 300-year-old inn, next to London’s Hampton Court Palace, was once the home of Henry VIII.
“It’s poised to open soon after refurbishment, with rooms costing about 250 pounds ($318) a night. Guests can dine on traditional fare in the Six restaurants, a reference to the monarch’s many wives, or grab a pint on the terrace.
“But for Theophilus Danjuma, this is just one investment in a network of assets that span at least three continents. The 80-year-old Nigerian is worth $1.2 billion, according to the Bloomberg Billionaires Index, with his family office managing a portion of that wealth, often through low-key holdings such as the 14-room hotel,” Bloomberg reports.
In addition to the Kings Arms Hotel, the Danjumas have also developed residential properties this year in Esher and Wimbledon.
The report further reads, “They (Danjumas) also own a boutique hotel in Lagos, serving beef carpaccio and lobster bisque in one of three dining areas and displaying works from the family’s art firm.
“Danjuma’s new venture is far removed from civil war and deepwater oil fields, the spheres where he amassed his power and fortune. In 2006, his South Atlantic Petroleum Ltd. sold almost half its contractor rights for a section off Nigeria’s coast to a state-backed Chinese firm for $1.8 billion.
“Danjuma was awarded the block in 1998 by the regime of former dictator and fellow army officer, Sani Abacha, making him one of a handful of Nigerians made extraordinarily wealthy from the country’s energy reserves."
Danjuma was born in 1938, the year Royal Dutch Shell received its first oil exploration license for the country and more than two decades before it gained independence from Britain.
He dropped out of college in 1960 to join the army, according to “Nigerian Politics in the Age of Yar’Adua” by Bayode Ogunmupe. He gained prominence after participating in the 1966 counter-coup against Nigeria’s first military dictator.
A decade later, he was stepping out of a Rolls-Royce in central London to meet British military officials in his role as chief of staff of the Nigerian Army.
He left the military in 1979 and founded his oil firm and a shipping company, NAL-Comet, which now has more than 2,000 employees in Nigeria. Danjuma paid $25 million in 1998 for the oil field exploration license that made him a billionaire. A year later, he became Nigeria’s defence minister as the country returned to democracy.
He originally teamed up with Total SA and Brazil’s Petroleo Brasileiro SA on the block. The minority stake that Danjuma’s company now owns is worth $450 million, according to Bloomberg’s wealth index.
While Mayfair is the hub of London’s family offices, the Danjumas chose the city’s southwest suburbs to set up their investment firm a decade ago. They’ve since invested in property in that area, including the 2.5 million-pound purchase in 2010 of the building where their office is now based, according to filings.
Beyond the U.K., they own real estate in California and have bought and sold property in Singapore. Their family office also oversees private equity investments, trust funds and a venture capital arm that backs family-run art and film companies. The Danjumas own more than 30 properties worldwide, filings show.
“We invest in real estate in other jurisdictions, but in the U.K. we always thought let’s stick to areas that we know,” says daughter Hannatu Gentles, the second of Danjuma’s five children and chief operating officer of his London-based family office.
Her father bought a residence in Singapore years ago, “and it made sense then to buy some more,” she said, adding they’ve since sold the properties because of tax law changes.
It might seem contradictory given the extent of his wealth, but he is quite well respected and almost looked upon as an elder in political circles,” said Roy, co-research director of the SOAS-led Anti-Corruption Evidence initiative. “The military held him in such high regard that he was able to help manage Nigeria’s transition from military rule to democracy.”
Owning a hotel in Nigeria led the family to look for a similar deal in the U.K. Two years ago, they paid 2.4 million pounds for the Kings Arms. Redevelopment work was expected to end in March, filings show, but the inn’s age and protected status resulted in higher costs and delays.
“This is the first, and will possibly be the last, listed building we’ve worked on,” Gentles said. “It’s taken longer than we wanted, but our name is attached to the building and we want to be proud of our work. It’s been a hard slog.”
***
Source: SaharaReporters
Top Stories