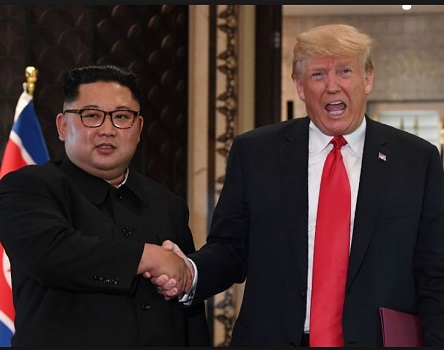 Kim Jong Un and Donald Trump
Donald Trump stepped onto North Korean soil Sunday as he met Pyongyang’s leader Kim Jong Un in the Demilitarized Zone dividing the peninsula, in a symbolic diplomatic spectacle and a first for any American president.

After shaking hands with Kim over the line that marks where their two countries and their allies fought each other to a standstill in the 1950-53 Korean War, Trump walked for several steps into North Korean territory, before another handshake.

The two men then walked into Seoul’s territory together — pausing on the line for photographers — where they were joined by South Korean President Moon Jae-in.

“It’s a great day for the world and it’s an honour for me to be here,” Trump said. “A lot of great things are happening.”

The impromptu meeting in the DMZ — which came after Trump issued an invitation on Twitter on Saturday — comes with negotiations between Pyongyang and Washington over the North’s nuclear arsenal at a deadlock.

The two would “just shake hands quickly and say hello because we haven’t seen each other since Vietnam”, Trump said earlier.

Their first summit took place in a blaze of publicity in Singapore last year but produced a vaguely-worded pledge about denuclearisation, and a second meeting in Vietnam in February intended to put flesh on those bones broke up without agreement.

Contact between the two sides has since been minimal — with Pyongyang issuing frequent criticisms of the US position — but the two leaders have exchanged a series of letters and Trump turned to Twitter on Saturday to issue his offer.

“If Chairman Kim of North Korea sees this, I would meet him at the Border/DMZ just to shake his hand and say Hello(?)!,” he wrote from from Osaka in Japan, where he was attending a G20 summit before flying to Seoul.