The former Chelsea midfielder admitted that the team should be blamed for the shocking 2-0 loss to Madagascar on Sunday. 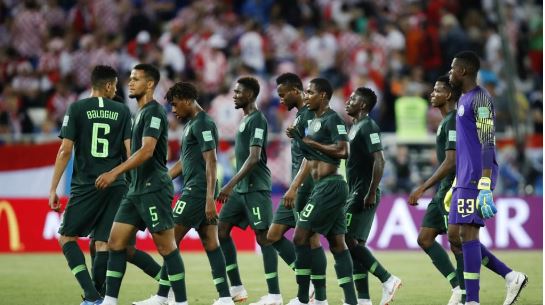 File Photo
Super Eagles captain, John Obi Mikel has blamed himself and his teammates for the team’s not-too-good performance at the 2019 African Cup of Nations in Egypt so far.
The former Chelsea midfielder admitted that the team should be blamed for the shocking 2-0 loss to Madagascar on Sunday.
The loss weakened the faith of Nigerian football fans in the team judging from that when Nigeria won the competition in 1980, 1994 and 2013 the team did not lose any match.
Mikel, however, admitted that the team has not been impressive at tournament despite winning their first two games. It was goals from Lalaina Nomenjanahary and Carolus Andriamahitsinoro that condemned Nigeria to their first defeat at the tournament and also losing the group’s top spot.
The former Middlesbrough star, who returned to the starting line-up failed to impress and had to make way for Alex Iwobi just before the hour mark.
Speaking to reporters in the mixed zone after the match, Mikel said, ”We didn’t play well, I think in the tournament so far we haven’t found our way to play. We have not really played well but we’ve won two games and lost this one now.
”In a way it’s better that it happened now than happening in the knockout stages, so now we know together as a team we have to improve, we have to do better, we have to find a way to play better and win games.
”It is going to be tough for us, we have to pick ourselves up, we have to keep our heads up and go again.”
About the team being criticized in the media and by fans Mikel added, “Obviously the criticism will come from our people but this is football, you get criticized this is why you are in the game.
”If you don’t get criticized you are not in the game, we have to take the criticism and improve.
Top Stories