The talented Brazilian, Neymar Jr is seemingly desperate to link up with Lionel Messi again 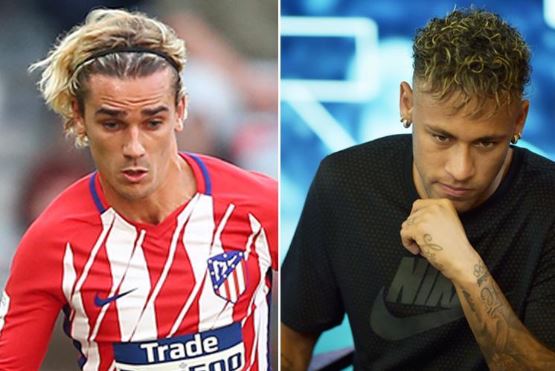 Antoine Griezmann and Neymar
Barcelona could be set to offload Ousmane Dembele, to make room for both Neymar and Antoine Griezmann, Kicker reports.
The deal to take Griezmann to the Nou Camp from Atletico Madrid has somewhat become complicated, by Neymar’s desire to return to Catalonia just two years after he left for Paris Saint-Germain.
The Brazilian is seemingly desperate to link up with Lionel Messi again and is even prepared to go on strike to force through the deal.
With Barca already a fairly long way down the road with negotiations for Griezmann, they face having to sell a big name or two in order to not to breach FIFA’s rules.
FIFA doesn’t allow clubs to finish a transfer window with a negative balance of €100million or more.
Bayern Munich are willing to take Dembele, with a fee of €100million being touted.
Top Stories