Uzoho has dropped down to third place in the pecking order, despite manning the posts for Nigeria at the World Cup just one year ago. 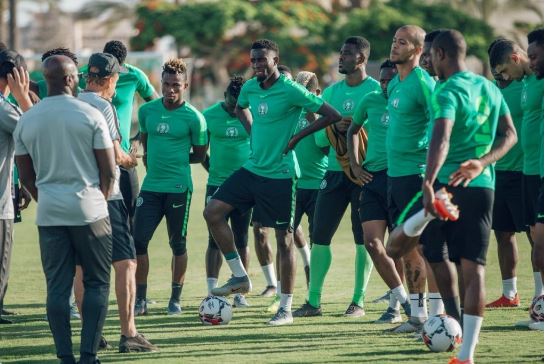 File Photo
Head coach of the Super Eagles, Gernot Rohr, has reportedly made up his mind about the goalkeeper that will start their Africa Cup of Nations third-place playoff against Tunisia today.
According to the team’s ex-media officer, Colin Udoh, the German will bring Francis Uzoho back into his starting XI.
“Gernot Rohr confirmed today that the other two players who have not played at this tournament will feature, even if they don’t start.
“That means we will see @Uzohof and @victorosimhen9 in action tomorrow,” Udoh tweeted.
Uzoho has dropped down to third place in the pecking order, despite manning the posts for Nigeria at the World Cup just one year ago.
With the Eagles already qualified for the Round of 16 after two group fixtures, Rohr opted to start Ikechukwu Ezenwa in the 2-0 defeat to Madagascar.
Rohr had hinted in his Tuesday’s press conference, that Uzoho might against the Carthage Eagles.
The 66-year-old also confirmed captain John Mikel Obi has suffered a fresh injury setback and is ruled out of the clash.
Mikel Obi, who is likely to retire after the AFCON, played two matches in the tournament.
Top Stories