Unai Emery Appoints New Captain After Fall Out With Koscielny


Xhaka and Ozil will remain as captains and Emery has also clearly seen enough for him to believe his fellow Spaniard Monreal can make the step up. 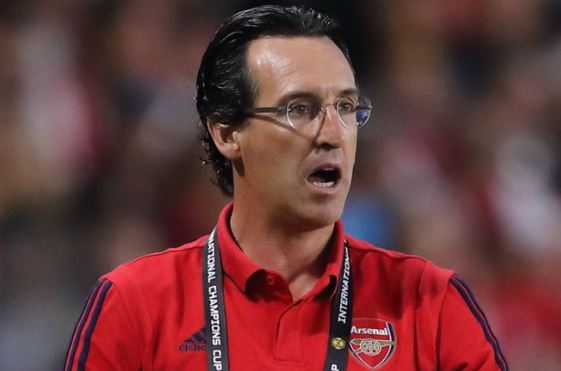 Unai Emery
Arsenal manager Unai Emery has included Nacho Monreal in his group of players who will act as captain in the upcoming season.
Emery implemented five players who he decided were going to lead the squad at the beginning of last season: Laurent Koscielny, Petr Cech, Aaron Ramsey, Mesut Ozil and Granit Xhaka.
While Cech has retired and Ramsey has moved to Juventus , Koscielny is unlikely to play for the club again after he refused to travel on the club's pre-season tour of the USA, with the 33-year-old pushing for a move back to his native France.
Xhaka and Ozil will remain as captains and Emery has also clearly seen enough for him to believe his fellow Spaniard Monreal can make the step up.
Nacho Monreal will become one of Arsenal's leaders next season. He also announced he will also choose two more players to complete the group.
Emery said: "We are working now with the captains. They are Xhaka, Ozil and Nacho Monreal. I want to add two more and then I am going to decide the number one, two, three, four and five in the next weeks."
Emery was speaking following Arsenal's disappointing 2-1 defeat at home to Lyon in the Emirates Cup, and he also hinted a £72m deal for Lille winger Nicolas Pepe is nearing completion.
He said: "Pepe is a very good player and also we are thinking only of players who can really, really improve this squad and also give us some different conditions to improve.
"The same, we are working for the last few weeks and before starting the season in the first match in Newcastle , our aim is to get the best team with the best players in our squad."
Arsenal will play French side Angers on Wednesday and Barcelona on Sunday ahead of their first game of the Premier League season against Newcastle on August 11.
Top Stories