How Man Utd Failed To Hijack Arsenal's Deal For Pepe


Lukaku did not leave the club for Inter Milan until the last day of the transfer window, so funds were not available. 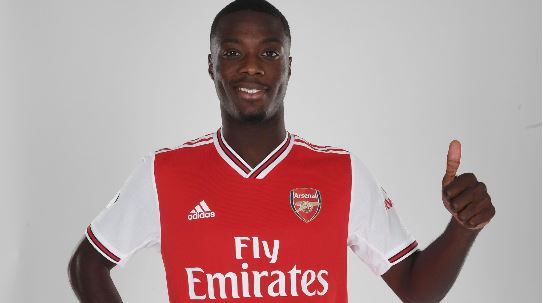 Nicolas Pepe
Manchester United made a €90million (£85m/$102m) offer for Nicolas Pepe before his move to Arsenal, according to Le10Sport.
United’s offer was tied to them selling Romelu Lukaku.
But Lukaku did not leave the club for Inter Milan until the last day of the transfer window.
By that time, Pepe had concluded his transfer to the Gunners.
It is also understood that Atletico Madrid also made an offer larger than Arsenal’s eventual bid of €80m that saw them land Pepe.
United manager, Ole Gunnar Solskjaer was only able to bring in Harry Maguire, Daniel James and Aaron Wan-Bissaka this summer.
Top Stories