The Serie A side made this known in a statement on the club's official website on Wednesday. 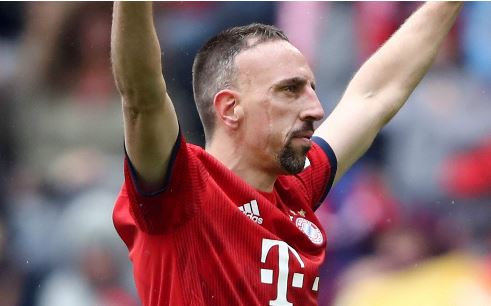 Franck Ribery
Fiorentina have signed Bayern Munich legend, Franck Ribery, as a free agent.
The Serie A side made this known in a statement on the club’s official website on Wednesday.
The statement read: “ACF Fiorentina announces that he has signed the player Franck Ribéry.
“The new purple footballer will be presented tomorrow, Thursday 22 August, at 5.30 pm in the “Manuela Righini” Press Room of the “Artemio Franchi” Stadium.
“At the meeting with the media, for logistical reasons, only 1 journalist per head may be admitted. We invite interested newspapers to attend the press conference to send a request for accreditation by 13:00 on Thursday.
“Starting from 20:00 the Artemio Franchi Stadium will open the gates of the Tribune to the purple fans to give everyone the chance to greet the new purple football player.”
Speaking after completing his move, Ribery revealed that former teammate, Luca Toni, helped convince him to join Fiorentina after leaving Bayern Munich at the end of his contract.
Ribery told the club’s official website: “I’m happy, I’m here with my family.
“I’ve talked to Fiorentina for the past week, as well as with Toni, who told me Fiorentina were a great club in a beautiful city.
“I’m happy because I like being here, even the language. My grasp of it isn’t perfect, but it’s all good.”
Top Stories

'Buhari Is Fake' - Die-hard Fan Of The President Apologizes To Nigerians, Begs For Forgiveness