Since his arrival on Merseyside, the 23-year-old's goals for the Toffees have come via his head. 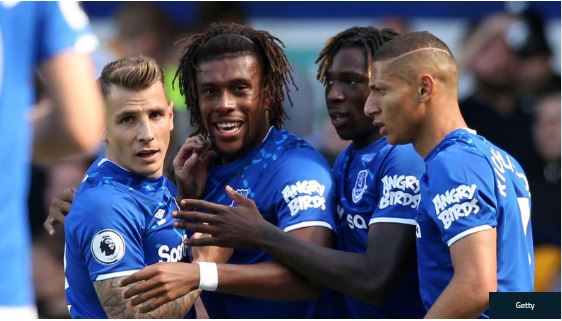 Alex Iwobi (middle)
Alex Iwobi has scored two headed goals for Everton this season, one more than he had during his professional spell at Arsenal.
The Nigeria forward opened his goal account for Everton against Lincoln City on Wednesday with a header and he also found the target against Wolverhampton Wanderers with his head in Sunday's Premier League outing.
Iwobi powered Gylfi Sigurdsson's cross to the back of the net in the 12th minute as the Toffees edged their visitors 3-2 win at Goodison Park.
During his stint at the Emirates Stadium, the Super Eagles star scored 15 goals across all competitions and only one came via his head.
After helping Everton secure a 3-2 win over Wolves - their second league win of the season - Iwobi will shift his focus on helping Nigeria during their international friendly match against Ukraine on September 10.
Top Stories