Since his superb performance in the 3-0 Europa win away at Frankfurt, Arsenal fans have been calling for a more regular feature for the youngster. 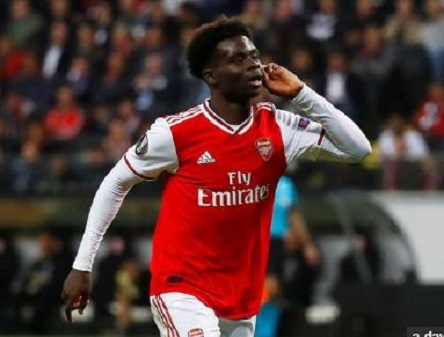 Bukayo Saka
Bukayo Saka, Arsenal’s latest revelation, is already becoming the fans’ favourite at the Emirate after his superb showing in their 3-0 Europa win away at Frankfurt.

The 18-year-old starlet grabbed a goal and two assists as the Gunners saw off last season’s semi- finalists Eintracht Frankfurt at the Commerzbank-arena.

Arsenal hosts Aston Villa on Sunday, with a section of fans urgingUnai Emery to start the teenage sensation against the Villans.

Rob Holden wrote on his instagram handle, “After that performance in the Europa, he deserves it. What’s the point in scoring and assisting if he doesn’t get a chance?”

Luka tweeted, “Yes, unless he’s super tired. But he should make the bench. Reiss got rested so he might start.”

Another fan known as King Laca, overwhelmingly rooted for his inclusion citingLacazette’s injury lay-off as a reason to start the teenager.

“Yes with laca out… auba can play central. And Saka will slot in perfectly.”

Louis Shiner wrote on his instagram handle, “Yes he deserves a reward for such a good game.”
Top Stories