One Chelsea Player Blamed For 2-1 Defeat To Liverpool


The Blues produced a spirited performance after half-time and N'Golo Kante pulled one back. 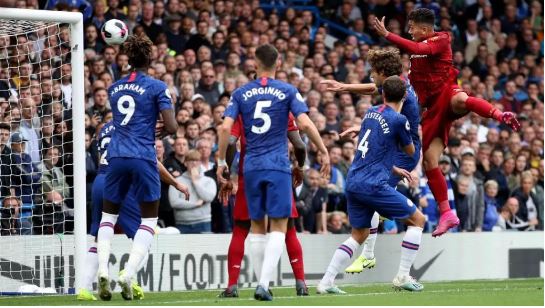 Chelsea vs Liverpool
Arsenal legend, Ian Wright, has blamed Chelsea striker, Tammy Abraham following the Blues’ 2-1 defeat to Liverpool in the Premier League on Sunday.
First-half goals from Trent Alexander-Arnold and Roberto Firmino, saw the Premier League leaders seize control at Stamford Bridge.
But the Blues produced a spirited performance after half-time and N’Golo Kante pulled one back.
Wright has now blamed Abraham for not punishing Liverpool for their defensive lapses after he missed a glorious chance to equalise for Frank Lampard’s men when he raced through to the goal but couldn’t slot the ball past goalkeeper Adrian.
”I think that’s where Tammy wants it, and now we see Trent Alexander-Arnold keeps him onside, no pressure on the ball, you can see him clearly onside there and now the line is too high,” Wright told Sky Sport.
”I saw it against Newcastle where they didn’t get punished and again they didn’t get punished and they should have been punished, Liverpool.
”Obviously, they have been working on it. Liverpool are not closing midfielders on the ball and if you got somebody willing to run into space you can catch them”.
Top Stories