The Frenchman has been included in Ernesto Valverde's plans after making a full recovery from a hamstring injury, but another star has been omitted. 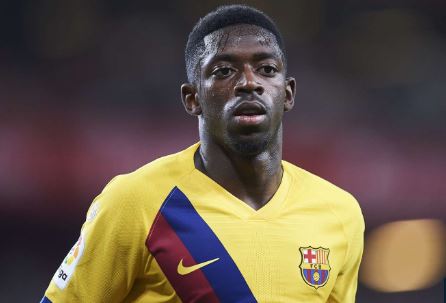 Ousmane Dembele
Ousmane Dembele has been included in Barcelona's latest matchday squad, but Ernesto Valverde has opted to leave Ivan Rakitic out of his final 18.
The reigning Liga champions continue the defence of their crown with a huge clash against Villarreal at Camp Nou on Tuesday night.
Barca have only managed to pick up seven points from a possible 15 at the start of the new season, with a 2-0 defeat at Granada on Saturday heaping more pressure on Valverde.
They will, however, welcome back a key performer in Dembele to face Villarreal, who has made a full recovery from a hamstring injury.
The 22-year-old has been out of action since picking up the issue during an opening day defeat to Athletic Club, but he was introduced back into full training last week.
Rakitic has not made the final cut though, with Valverde citing intense competition for places as the reason behind his absence.
The Barca boss told a press conference on Monday: "If he's not there, it's because someone else is. He hasn't got an issue, it's a question of players, we have a lot in midfield"
With a trip to Getafe on the horizon on Saturday, Valverde is eyeing maximum points this week to lift the mood at Camp Nou.
"We want to pick up the six points in play this week," he added. "The fans have been behind us at both home games and we hope that's the case again tomorrow versus a great team like Villarreal."
Elsewhere, Lionel Messi could be in line for his first start of the 2019-20 campaign, after taking in 45 minutes of action against Granada.
The five-time Ballon d'Or winner also featured in Barca's 0-0 draw with Borussia Dortmund in the Champions League last week, having only just returned to full fitness following an injury lay off.
Luis Suarez and Antoine Griezmann are available too, meaning Valverde has a full attacking contingent to choose from tomorrow evening.
Teenage sensation Ansu Fati has retained a place in Barca's squad, after contributing two goals and one assist in five appearances across all competitions.
The 16-year-old became the youngest La Liga goalscorer in the Blaugrana's history when he netted during a 2-2 draw at Osasuna on August 31 and he has been tipped to fight for a regular spot in Valverde's XI as the season progresses.
Top Stories