Bale Left Out Of Real Madrid Squad For Osasuna Clash


The Wales international has been in impressive form for Los Blancos this season but mystery shrouds his absence for Wednesday's match. 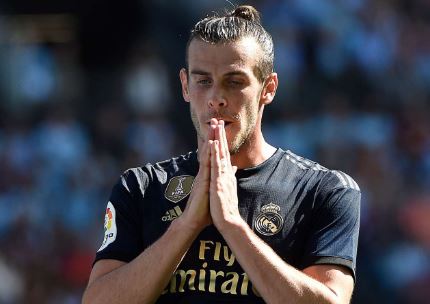 Gareth Bale
Gareth Bale has been left out of Real Madrid's squad for their clash with Osasuna in La Liga on Wednesday.
Zinedine Zidane's side are looking to build on their victory over Sevilla on Sunday, with a win over their newly-promoted opposition potentially enough to take them to the top of the table depending on other results.
They will have to do without Bale, however, who has made a strong start to the season following a summer of uncertainty regarding his future.
Blancos president Florentino Perez pulled the plug on the Wales international's proposed move to Chinese Super League side Jiangsu Suning as Zidane looked to move the forward on.
The reaction of Bale, however, has been impressive, with the former Tottenham star contributing two goals and an assist in his four Liga matches in 2019-20.
Zidane even went so far as to hail Bale's impact in his pre-match press conference for the Osasuna clash on Tuesday, labelling the 30-year-old a "great player".
"Bale's really focused, same as the rest," he said. "He wants to do great, he's in a good moment. He's an important player and he knows he's a great player.
"He helps when we attack and when we defend, as he did in the last game. When everyone is committed, we can do great things."
But Bale will be forced to watch on from the sidelines, with mystery surrounding the exact reasons for his absence.
Madrid have not released a statement to suggest that it is fitness related, with the most logical explanation being that the forward is being rested ahead of Saturday's derby clash with Atletico Madrid.
If that proves to be the case then he is the only senior member of Zidane's squad to be afforded the evening off, with the only other absentees having already been confirmed as injured.
Left-back duo Marcelo and Ferland Mendy are both on the path to recovery along with midfielders Luka Modric and Isco.
Marco Asensio and Brahim Diaz have more long-term fitness issues, though there are places in the squad for Rodrygo and Fede Valverde following recent injuries of their own.
Top Stories