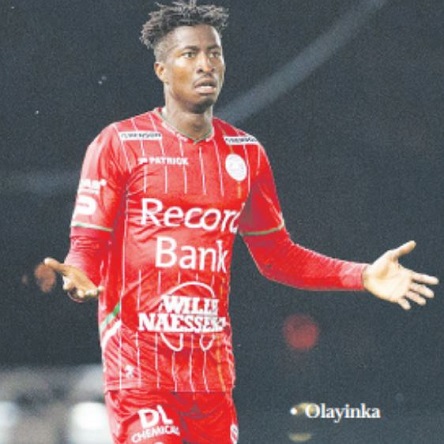 Peter Olayinka
Little was known about Peter Olayinka until he netted a goal for Slavia Prague in their 1-1 draw against Inter Milan on September 17 in the UEFA Champions League.

The goal by the Oyo State-born star made him the first Nigerian after Yakubu Aiyegbeni to score on his UEFA Champions League debut since 2002.

The former 36 Lion striker has also scored two goals in seven Czech first league appearances, which takes his goal tally for the club to nine goals and four assists in 49 matches.

At Gent, he did not have playing time during his two-year stay with the Belgian club before being shipped out.

Olayinka started his career in Ibadan before moving to Lagos to join 36 Lions FC, and in January 2012 he joined Bylis Ballsh in the Albanian Superliga, where he initially joined the club’s under-19s due to being just 17 at the time.

On 21 July 2018, Slavia Prague signed Olayinka to a four-year contract from KAA Gent for 3.2m Euros.

Prior to his call-up to the Super Eagles, Olayinka had expressed his desire to feature for Nigeria but there were numerous discussions about making Olayinka, the first foreign player of Albania national football team.
Top Stories