Ozil Doesn't Deserve To Be In Arsenal Team, Says Emery


The Gunners boss left his top earner out for the second game running against Standard Liege and believes those selected are more worthy. 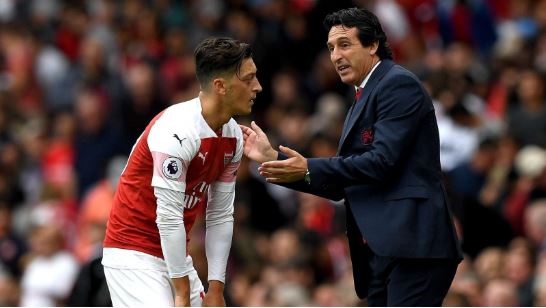 Mesut Ozil and Unai Emery
Unai Emery has suggested that he sees other players as more deserving of a spot in Arsenal’s matchday squad than Mesut Ozil.
The German was a notable omission from the 18 named for the Gunners’ 4-0 win over Standard Liege in the Europa League and was not involved in the 1-1 draw against Manchester United either.
Emery has shown an increasing reluctance to use Ozil – the club’s top earner – this season, handing the 30-year-old just two appearances and often leaving him out entirely.
When quizzed on the thinking behind his selection decisions, Emery hinted that he felt the players who were picked deserved their spot over Ozil.
“I am thinking every time to decide with the best players for each match and the best players in the squad to play and help us,” Emery said to BT Sport after the game.
“When I decided he isn't in the squad, it is because I think another player deserves it more.
"Sunday we have another match. And we are going to decide the same.
"The best first 11 possible to achieve our target to win on Sunday and also adapt to that difficult of playing Bournemouth. And carry on our way that is the same in each match.”
One player that did feature and made a considerable impact was 18-year-old summer signing Gabriel Martinelli.
The Brazilian started up front and hit two in the space of three minutes to set the Gunners up for a comfortable evening at the Emirates.
Despite featuring as a striker in both of his Arsenal appearances so far, Emery insisted that the teenager is naturally a winger, but praised him for his display despite being out of position.
"He prefers to play as a left winger – striker is not the best position for him,” Emery continued.
“But the first thing in his mind is to help us. Tonight his performance and his attitude was amazing. If he continues training with that hunger, I think he is going to do well.”
Martinelli made his debut against Nottingham Forest in the Carabao Cup and scored twice on that night as well in a comfortable 5-0 win for Arsenal.
Top Stories