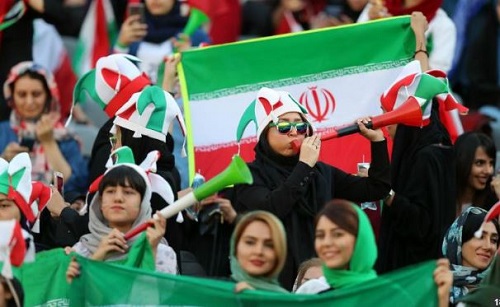 Iranian Women Attend Football For The First Time To Watch Their Men Thrash Cambodia 14-0
Iranian women have watched the country’s national football team play after authorities allowed them to buy tickets for the first time in decades, celebrating their long-awaited access to the national stadium but also paying tribute to the “Blue Girl” fan who died last month.

Iran, one of the traditional powerhouses of Asian football with a passionate fanbase, won their World Cup qualifying match against Cambodia on Thursday 14-0 but the one-sided game will be remembered much more for the scenes in the stands.

Iran women have been banned from watching men’s games in Iran since shortly after the 1979 Islamic revolution with only a few exceptions made for small groups on rare occasions.

But under pressure from world football’s governing body FIFA and women’s rights campaigners, Iranian authorities earmarked tickets for them to watch Thursday’s game.

FIFA had sent a delegation to Tehran (Iran capital) to ensure that women were allowed to attend the game following the death last month of Sahar Khodayari, who set herself on fire to protest against her arrest for trying to get into a match.

Dubbed “Blue Girl” online for her favourite team Esteghlal’s colours, Khodayari had feared being jailed for six months by the Islamic Revolutionary Court for trying to enter a stadium dressed as a man.

“We (Iranians) have an incredible feeling as the first Iranian women entering the stadium,” said one fan, interviewed by local television.

Another video interview, distributed on social media, showed a woman fan inside the stadium, on the brink of tears with an Iranian flag over her shoulders and painted on her face.

“It was really a very big wish. Really, thank you for letting us come. I’m shaking. Thank you,” she said.
Top Stories